“Through receiving prophecies from great siddhas, yidams and Dakinis,
You display numerous miraculous abilities in yogic conduct.
Protector of gods and humans, your power vanquishes arrogance.
Thongwa Dönden, we supplicate at your feet.”
— from Supplication To The Karmapas (full text) 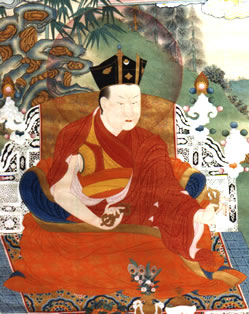 The sixth Karmapa was born in Ngomtö Shakyam, near Karma Gön in eastern Tibet, to a family of devoted yogins. Shortly after his birth, while his mother was carrying the young child, he suddenly became very excited when their path crossed that of Ngompa Chadral, a student of the fifth Karmapa. Ngompa Chadral asked the name of the child, who smiled and replied “I’m the Karmapa.” Ngompa Chadral cared for the infant for seven months and then took him to Karma Gön.

At a young age, he began to compose many tantric rituals, eventually establishing a body of liturgies for the Kamtsang lineage. He also joined the lineages of the Shangpa Kagyu and the Shijay (Chöd – “cutting through egotism”) into the main Kagyu lineage transmissions.

He dedicated his activity to composition, teaching, restoring many monasteries within Tibet, printing books and strengthening the sangha. He began to develop the shedra system, the monastic university, in the Karma Kagyu lineage.

Realizing that he would die at an early age, he entered retreat, and conferred a regency on the First Gyaltsab, Goshir Paljor Döndrup, indicating where he would next take birth. The sixth Karmapa’s main spiritual heir was Pengar Jampal Zangpo, author of the “Mahamudra Lineage Supplication.” This renowned prayer of the Kagyü lineage represents his spontaneous utterance upon realizing mahamudra. Thongwa Dönden passed into parinirvana at the age of thirty eight (1453).