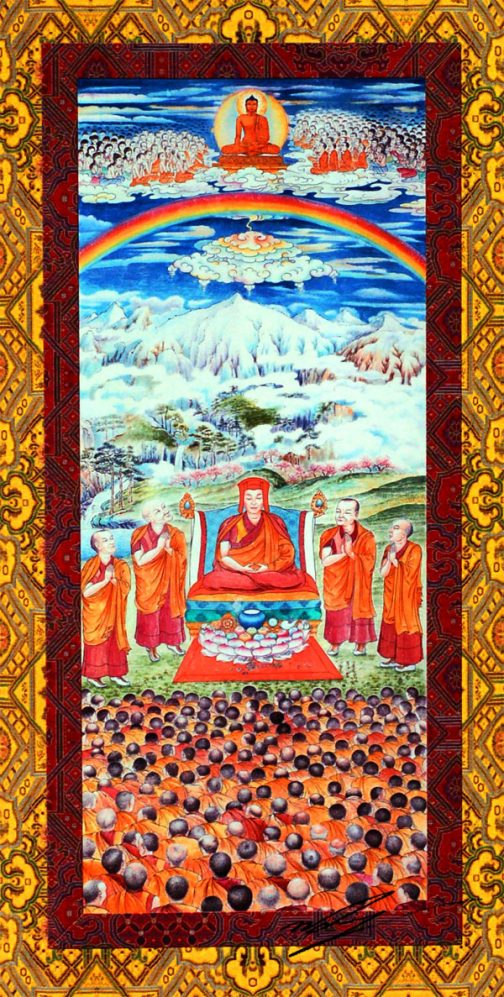 A painting of Gampopa done by the 17th Gyalwang Karmapa.

Gampopa — His Life and Teachings

Gampopa Sönam Rinchen was born in Nyal in central Tibet. His father was Nyiwa Sangye Gyalpo and mother was Shomo Zatse. He was named Dharma Drak.

Gampopa’s life as a doctor

His father started his son’s education at the age of five. For over eight and one-half years, beginning at the age of seven, he studied medical sciences and received training as a physician from Kyeme, an Indian doctor, Usil, a doctor from the Tsang region of central Tibet, and Viji, a Nepalese doctor. For many subsequent years, he continued his medical training, studying under thirteen other doctors from China and Tibet. He became one of the best doctors of the time, and was known as Dakpo Lhaje, the physician from Dakpo.

He also became interested in dharma and started to study in the Nyingma lineage from the master Bar-rey, and in the Kadam tradition with Sharpa Yonten Drak.

Striken by an epidemic

At the age of sixteen, Dharma Drak married the daughter of Chim Jose Dharma Ö. They had two children. He lived as a householder and as a highly-trained physician, he received great respect from the community. At the age of twenty-five, his wife and children died from an epidemic disease, and this caused him to fully turn his mind towards dharma.

Hearing of the fame of the Lord of Yogins, Milarepa, he decided to search for him. After a long and difficult journey, Gampopa arrived at Trode Tashigang, where it appeared that Milarepa already had been expecting him. He and his disciples received the monk, Gampopa, with great respect and hospitality. Because of Gampopa’s pride, however, his audience with Milarepa was delayed for two weeks.

When Gampopa met Milarepa for the first time, the latter offered this new disciple a bowl of chang (Tibetan beer). Although Gamapopa initially hesitated to drink it because it would be a violation of his monastic vow, he did so anyway, which demonstrated that he would receive the full lineage teachings of mahamudra and tantra from Milarepa. This was an historic moment. After this significant meeting, Gampopa practiced with great diligence and endured many hardships under his guru; he had many experiences and finally attained great realization. He became the most important disciple and the lineage holder of Milarepa.

Gampopa was the founder of the monastic order of the Kagyu School and the lineages that branch out from him is known as the Dhakpo Kagyu. He founded the Dhaklha Gampo Monastery where he continued his activities of teaching, meditation, and benefiting beings. Gampopa is the author of a most famous book, The Jewel Ornament Of Liberation, and many others. His collected works comprise three or four volumes.

Gampopa held both lineages of the Kadampa as well as the mahamudra and tantric traditions of Milarepa. Since his time; the Kagyu tradition has contained both lineages together and has become rich in methods for leading disciples to realization. Gampopa led his own students first through the common mahayana path of the Kadampa lineage teachings, and then through the uncommon mahamudra and tantra path of the Kagyu lineage instructions of Milarepa.

Teachings by the Karmapa on Gampopa’s texts

The present Gyalwang Karmapa has kindly taught on Gampopa’s most famous texts many times such as the recent teaching on the Jewel Ornament of Liberation in Bodhgaya.