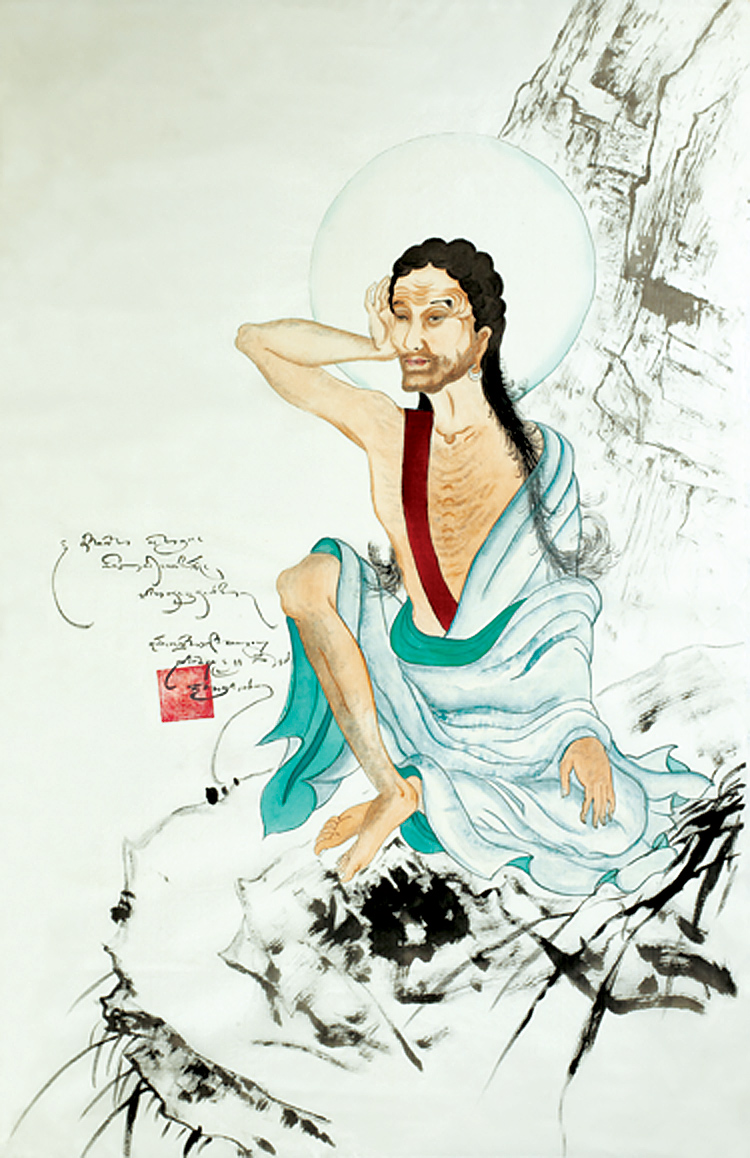 Milarepa is widely regarded as Tibet’s greatest yogi, famous for his strict mountain retreats, beautiful songs of realization, and devotion to his teacher, Marpa.

Milarepa was born in Gungthang. His father was MilaSherap Gyaltsen and mother, Nyangtsa Kargyen. He had one younger sister, Peta Paldron. He was named Mila Thöpaga, which means “Mila who is a joy to hear.”

At a young age, he lost his father and his family’s estate passed into the hands of his father’s brother, Mila Thöpaga’s uncle, who, with his wife, virtually enslaved Mila’s mother and family, making them work in the field. He, along with his mother and sister, went through tremendous suffering because of the ill treatment of his uncle and aunt.

A foray in to magic

At his mother’s request, when Mila grew up, he studied magic from two different teachers in order to take revenge through the use of magical powers. Through a spell, he killed thirty-seven people, including his uncle’s family, and destroyed most of the crops of the village. After this was done, great remorse arose in him for the heavy karmic consequences he had caused himself, and his mind turned towards the sacred dharma.

Mila first went to the Tsang region and studied with the great master, Rongtön Lhaga. The latter eventually advised Mila to go and study with Marpa. At the age of thirty-eight, he went to Lhodrak to find Marpa. Before he arrived, Marpa had a dream in which a yidam prophesied the arrival of Milarepa.

Mila spent over six years studying with Marpa, who made Mila build the famous nine-story tower as part of his journey on the path. At the end, he received the abhisheka of Chakrasamvara from Marpa during which he received the secret name, Shepa Dorje, which means “Laughing Vajra.” Marpa also conferred on Milarepa the full transmissions, instructions, and abhishekas of Tantra, as well as the lineage of Mahamudra – all that Marpa had received from Indian mahasiddhas Naropa and Maitripa.

The enlightenment in one lifetime of Milarepa

After practicing very diligently for twelve years under Lord Marpa, Milarepa attained the inseparable state of vajradhara (the complete state of enlightenment) in this very lifetime. He then became known as Milarepa, which means the “Mila, the cotton clad one.” (“Repa” is the designation given to many tantric yogins since they wear a white robe.) At the age of forty-five, he started to practice at Drakar Taso (White Rock Horse Tooth), and other well known caves and also began to wander and teach at various places.

Milarepa is most famous for his songs and poems, in which he expresses the profundity of his realization of the dharma with extraordinary clarity and beauty. Many of Milarepa’s poetic compositions have been translated into numerous other languages.

Milarepa had countless disciples such as Rechung Dorje Drakpa, Gampopa or Dhakpo Lhaje, the eight-heart-sons, and many others. Among them, his spiritual successor who continued his lineage and became one of the main lineage masters in Milarepa’s tradition was Gampopa.