“In the future, you will be the buddha named Drukpa Sengge, In the present, you nurture all realms through many emanations. Lord of dharma, ruler of the teachings of the practice lineage, Düsum Khyenpa, we supplicate at your feet. ” —from Supplication To The Karmapas (full text) 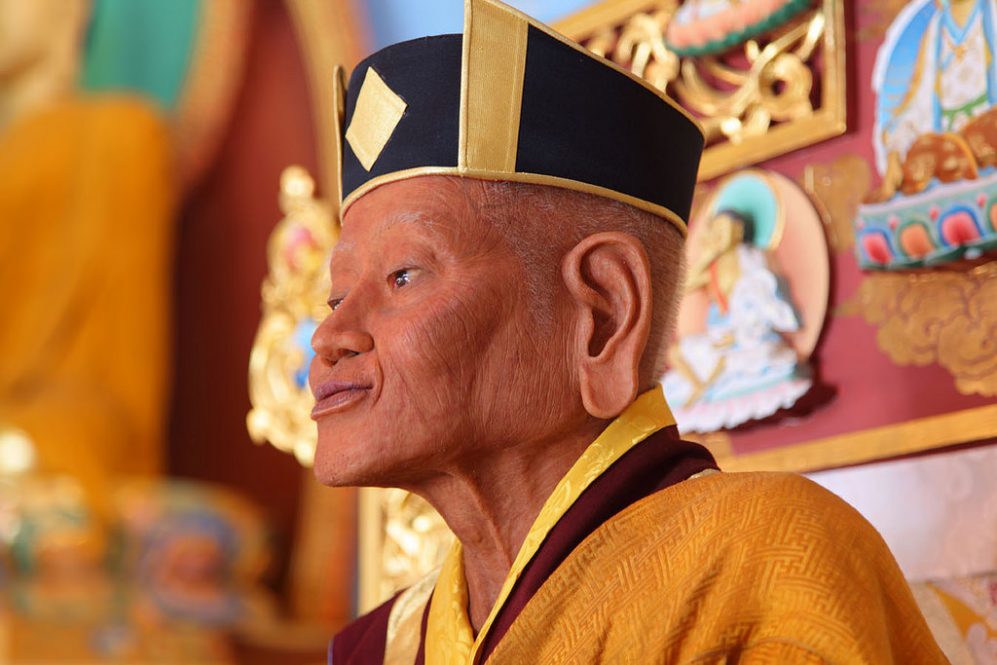 Statue of the First Karmapa, Dusum Khyenpa, designed by the 17th Karmapa.

The birth of the 1st Karmapa, Dusum Khyenpa

Born to a family of devoted Buddhist practitioners in Teshö in eastern Tibet, the boy who was to become known as the first Karmapa was called Gephel as a child. He first studied with his father, and became a knowledgeable and seasoned practitioner, even as a young child. He continued his education with other Buddhist teachers of the region. First Teachers

Already quite learned by the age of nineteen, he moved to Central Tibet, became a monk and spent the next twelve years or so engaging in study and meditation practices. He studied with very well known masters of the time, such as Chapa Chokyi Senge (1109-1169), a great logician and the founder of the debate system in Tibet, and Patsab Lotsawa Nyima Drakpa (1055-?), who translated many madhyamaka texts (one of the highest schools of Buddhist philosophy) into Tibetan and was a great master of the Prasangika Madhyamaka tradition.

At the age of thirty, he received teachings from Gampopa, the heart son of the greatest yogi in Tibetan history, Milarepa. Düsum Khyenpa first trained in the foundation practices of the Khadampa tradition and, following that, in the general philosophy of the sutras. This training in the basis of all Buddhist traditions established a pattern for all future Kagyu followers by demonstrating the importance of establishing a correct basis of knowledge. This is true even when engaging in the most powerful of advanced vajrayana practices. Düsum Khyenpa also received and unified the lineage teachings he received from Rechungpa and other students of Milarepa.

The Karmapa’s accomplishment in meditation and the practices transmitted to him by his teachers were greatly enhanced by his own natural compassion. His practice produced rapid results and great accomplishments, or siddhis. Such accomplishment is often perceived by followers as the ability to perform miraculous activity and in fact, the legends of the Karmapas through the ages speak of their ability, through the manifestation of this seemingly miraculous activity, to create a great sense of wonder and faith in their students. All the Karmapas have since been known for their ability to inspire, through their simple presence, this profound sense of wonder and faith in the reality of the accomplishment which is the fruition of the Buddhist path.

The first Karmapa, Düsum Khyenpa, made predictions about future Karmapas. In particular, he prophesied detailing his future incarnation.

The principal student who held the lineage of the Golden Rosary from the First Karmapa was Drogon Rechen.