“Endowed with inconceivable knowledge, activity and skillful means,
And indestructible vajra-like samadhi,
Protector of the world who personifies effortless compassion,
Thekchok Dorje, we supplicate at your feet.”
—from Supplication To The Karmapas (full text) 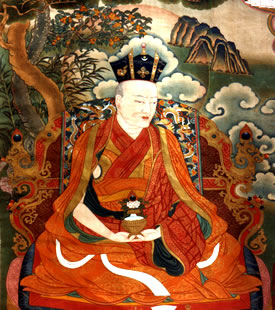 Theckchok Dorje was born in the village of Danang in the Kham region of eastern Tibet. He was born in mid-winter, and the histories say that flowers spontaneously blossomed and many rainbows appeared. The baby recited the Sanskrit alphabet. He was recognized by Drukchen Kunzig Chokyi Nangwa, the holder of the thirteenth Karmapa’s letter giving the details of his forthcoming reincarnation. He was enthroned and later ordained by the ninth Tai Situpa. The Karmapa received teachings and the lineage transmissions from Situ Pema Nyinche Wangpo and Drukchen Kunzig Chokyi Nangwa.

Theckchok Dorje lived very simply and exemplified the ideal monk. He was gifted in poetry and dialectics and participated in the ri-me (non-sectarian) movement, whereby many noted scholars showed great interest in each others’ traditions and teachings. This exchange was particularly intense between the Kagyu and Nyingma traditions, with the Karmapa passing on teachings to Jamgon Kongtrul Rinpoche. Thekchok Dorje received some tantras from the Nyingma visionary treasure-revealer Chogyur Lingpa and those rituals were subsequently introduced into the Tsurphu calendar.

Chogyur Lingpa had important visions of future Karmapas, up to the twenty-first. These were noted down and memorialized in a thangka, a Tibetan form of sacred painting. The fourteenth Karmapa’s spiritual heir was the great ri-mé (nonsectarian) master and prolific author, Jamgon Kongtrul Lodro Thaye. Thekchok Dorje taught widely in Tibet and recognized the tenth Situpa, Pema Kunzang. Thekchok Dorje passed into parinirvana at the age of 71, leaving detailed instructions on his next incarnation.