“With the great sun of vajra wisdom, you vanquish without remainder
The darkness of agitated mind,
Those forces that are the expressions of the degenerate age.
Düdül Dorje, we supplicate at your feet.”
—from Supplication To The Karmapas (full text) 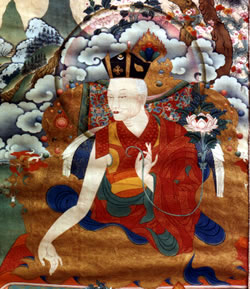 The 13th Karmapa was born in Nyen Chawatrong in southern Tibet. Found by Kathok Rigzin Tsewang Norbu, the child was brought to Tsurphu. He was recognized at the age of four and enthroned by 7th Goshir Gyaltsab Rinpoche and Kathog Rigdzin Tsewang Norbu.

From the age of eight, Karmapa received full transmission and teachings of the Kagyu lineage from his main guru, Tai Situpa. He also studied with many great masters of the Nyingma and Kagyu lineages of the time, such as Kathok Rigdzin Tsewang Norbu, Kagyu Trinley Shingta, Pawo Tsuklak Gawa, and others.

At one point the famous Jo-kang temple, home of the Jo-wo image, was threatened by rising flood waters. A prophecy from Guru Rinpoche had foreseen this and predicted that only the Karmapa could do something to stop it. Aware of the prophecy, the Lhasa authorities requested him to come. Unable to leave Tsurphu immediately, he resolved the problem by writing a special letter of blessing and invoking the compassion of Avalokitesvara. Later, when he was able to come to Lhasa, the thirteenth Karmapa offered a white scarf (kata) to the Jowo image, and it is said that the arms of the statue changed position to accept it and have been that way ever since. Dudul Dorjé was also asked to consecrate a distant monastery. Remaining at Tsurphu, he threw blessing grains in the air at the appropriate moment of the consecration ceremony. It is said that they were seen to shower down from the heavens at the monastery in question hundreds of kilometres away.

Düdul Dorje and Tai Situpa with Kathok Rigdzin Tsewang Norbu recognized the Shamarpa’s reincarnation, Chödrup Gyatso, the younger brother of the fourth Panchen Lama, Palden Yeshe.
He passed into parinirvana and Situpa Pema Nyinchey became his spiritual heir. He left behind the detailed prediction letter and instructions on his next incarnation.