“In various languages, you tame many types of beings.
Through reasoning that is free of the extremes, you dispel all wrong assertions,
And with perfect speech reveal the true state of things.
Rölpay Dorje, we supplicate at your feet. ”
— from Supplication To The Karmapas (full text) 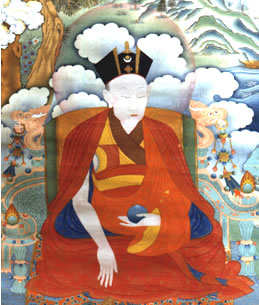 The fourth Karmapa was born in Chamdo province, in eastern Tibet. It is said that while pregnant, his mother could hear the sound of the mantra Om Mani Padme Hung coming from her womb, and that the baby said the mantra as soon as he was born. At the age of three, he announced that he was the Karmapa.

At a young age, he manifested the ability of the Karmapas to perform extraordinary activities, as spontaneously reading books and receiving many profound teachings in his dreams. As a teenager, he received the formal transmissions of both the Kagyu and Nyingma lineages from the great Nyingma guru Yungtönpa, the third Karmapa’s spiritual heir. At age nineteen, Emporer Toghon Temur invited the Karmapa to return to China. He accepted and began an extended journey, stopping many places along the way to give teachings. He taught for three years in China, establishing many temples and monasteries there. Temur was the last Mongol emperor of China. The subsequent emperor of the Ming dynasty later invited the Karmapa to China, but Rolpe Dorje sent a lama in his place.

AN AUSPICIOUS MEETING
During his return to Tibet from China, Rolpe Dorje gave upasaka, lay ordination, to a very special child whom he named Kunga Nyingpo. Rolpe Dorje predicted that this child, from the Tsongka region, would play an important role in the Buddhism of Tibet. The child was to become known as the great master Tsongkhapa, the founder of the Gelugpa school.

An accomplished poet, Rolpe Dorje was fond of Indian poetics, and composed many wonderful dohas, or songs of realization, a form of composition for which the Kagyü lineage is famous. After one of his students had a vision of a Buddha image over 300 feet tall, the fourth Karmapa engineered a huge painting (thangka) of the Buddha. It is said the Karmapa traced the design of the Buddha’s outline with the hoofprints of a horse he was riding. The design was measured and traced on cloth, and five hundred workers completed the cloth painting of the Buddha and founders of the mahayana after laboring for over a year.

He passed into parinirvana in eastern Tibet. Among many disciples, his main disciple who became the next lineage holder was the second Shamar Rinpoche, Khachö Wangpo.