“You embody the nonconceptual, great bliss dharmadhatu,
And expand the wisdom that knows the profound and luminous non-dual nature.
Dispeller of the darkness of ignorance, sole friend of all beings,
Changchub Dorje, we supplicate at your feet.”
—from Supplication To The Karmapas (full text) 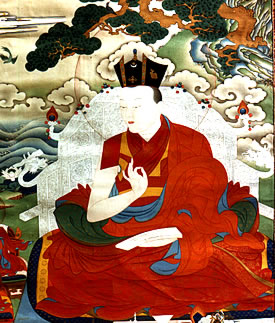 The twelfth Karmapa was born at Kyile Tsaktor in Derge province of eastern Tibet. Chökyi Dhöndrup sent a search party and his envoys brought the child to Karma Gön where Shamarpa met with the young child and recognized him in accordance with the previous Karmapa’s prediction and instructions.

The young Karmapa studied under many illustrious masters. He gave profound Kagyu teachings to the famous Nyingma master of Katok monastery, who in turn shared his Nyingma teachings.

Changchup Dorje made a pilgrimage to India and Nepal, accompanied by the Shamar, Situ, and Gyaltsap Rinpoches. Upon reaching Nepal, he was greatly honored by the King of Nepal, who credited him for stopping a raging epidemic and for making rain that ended a serious drought. In India, they visited the sacred places of Lord Buddha.

After the Karmapa returned to Tibet, he accepted an invitation to China, and set out accompanied by the Shamarpa. However, foreseeing difficult political times ahead and realizing the need to leave his body, the Karmapa succumbed to smallpox, as did the Sharmapa two days later. Tai Situpa became his spiritual heir.