His Holiness the Karmapa Begins Winter Retreat in Bodh Gaya 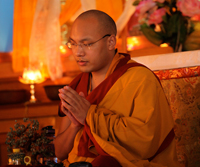 Since February 26, His Holiness the Karmapa has been visiting Bodh Gaya, the place of Lord Buddha’s enlightenment and the holiest site for Buddhists worldwide. During his stay in Bodh Gaya, His Holiness is engaged in his winter meditation retreat at Tergar Monastery, a Tibetan Buddhist monastery founded by Yonge Mingyur Rinpoche.

While requesting that the press respect His Holiness’ privacy during his retreat and puja program in Bodh Gaya, Mingyur Rinpoche addressed a gathering of local press members. Mingyur Rinpoche is a world-renowned Buddhist teacher and author of the bestselling book, The Joy of Living.

Speaking to reporters yesterday, Mingyur Rinpoche said, “We are very grateful that His Holiness’s name has been cleared.” Rinpoche thanked the Indian government and Tibetan government-in-exile and was also thankful for the blessings from His Holiness the Dalai Lama and for the support from the Himalayan people, Indian people and people all around the world. “We appreciate everyone’s support,” he said.

“I feel very sad and upset about the allegation that he is a Chinese spy,” Rinpoche commented. “This allegation has hurt the disciples of His Holiness. He is an enlightened being, but for us it’s been very hurtful and upsetting.“

Following his retreat in Bodh Gaya, His Holiness will travel to Varanasi, to celebrate the Tibetan lunar new year. He will also participate in an associated puja cycle and confer four days of Dharma teachings from March 9 through 12.
For press enquiries, please contact:
Deki Chungyalpa
Adviser to Karmapa Office of Administration
(91) 8894502910
koapress@gmail.com