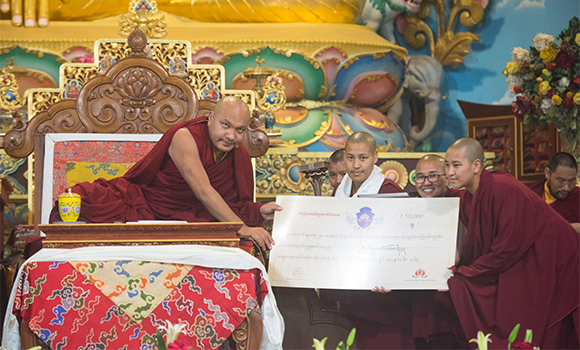 The sharp, unhesitant and unbounded voice of a debater punctured the air in Tergar monastery one recent afternoon this March. Commanding, it webbed layer after layer of analytical reasoning, tethering other debaters to join her in unison and capturing the attention of the audience. Standing at one end of the temple, the Karmapa, hands held behind his back, lengthened his neck upwards and listened.

That tempered afternoon, a distinctive quality also arose with that young voice for the Karma Kagyu order: that a nun could deliver a sound debate in the presence of the Karmapa unlike before, and that she — along with her fellow debaters — could do so in a setting full of judges, shedra faculty, her own competitors, an assembly of nuns from nine distinctive nunneries, and anyone else who was watching.

To be sure, her own effort marked the courage of some 450 nuns, who unaccustomed to the spotlight, competed with each other in a similar setting over a period of two weeks. The topics they debated distilled the finer points of the fundamental subjects of Buddhist logic known as “Collected Topics” and “Types of Evidence”. In this, their first debate competition, the nuns demonstrate how far they have come since the Arya Kshema Winter Dharma Gathering for the nuns was established in 2014.

“It’s only been three years since they’ve been studying and there’s been an incredible improvement,” the Karmapa would laud that same evening as he awarded prizes for the best group and individual performances. Two nunneries obtained first and second places in both subjects, Thrangu Tara Abbey in Nepal, and Karma Drupdey Palmo Chokyi Dinkhang Nunnery in Bhutan. Karma Drubgyu Thargay Ling Tilokpur Nunnery in India saw one of its nuns take the first prize for the most diligent contestant, while Thrangu Tara Abbey received the overall first place, and first prizes for best debater and defender.

All of the nuns had displayed incredible diligence, the Karmapa had said that evening jubilantly while teasing the khenpos. “The khenpos were very surprised. Sometimes they get a little worried.”

Referring to the three geshemas who served as judges of the competition, he added:

“It must have been really difficult to decide who is the most diligent. If I were one of the judges, it would have been very difficult for me because they are too diligent.”

Though diligence comes easy for the nuns, it appears that confidence is less so.

Three years ago, it was a very different picture when the first group debate was held in Tergar Monastery. The nuns remained silent and overwhelmed when the Karmapa sat behind the two responders. A daunting fifteen-minute lapse of time passed and the nuns contesting could not debate nor respond very easily. To ease the pressure, some remember that the Karmapa stood up and left.

What has slowly chipped away at that shyness is the experience in debate they are gaining. Nunneries have been active to support them by reinforcing study curriculums with more debate sessions, or in some cases introducing debate for the first time. They have also invited skilled geshes and khenpos to train the shedra nuns and prepare them for their annual Arya Kshema assembly in Bodh Gaya.

Since the inception of the Arya Kshema gathering, the Karmapa has used various skillful methods to boost the nuns’ confidence and support their burgeoning wisdom. In a formal setting, he imparted teachings on Lord Gampopa’s Jewel Ornament of Liberation and performed special Dharma rituals with them, such as the three-day ceremonies for Karma Pakshi and Tseringma. At the onset of the debate competition, this year, the Karmapa told the nuns that when studying, there should be an aspect of competition because without it there would be no improvement.

In an informal manner, the Karmapa also displayed his support and affection for them. On the eve of the awards ceremony, for example, two groups of young nuns were set to performed their debates. For the first group, the start was difficult but the Karmapa tenderly laughed and the nuns did also. Though he was sitting on the throne, his gesture of covering his mouth with his sen while laughing softened any inhibition and the nuns were able to start their debate, soon enough. The first day the nuns arrived, the Karmapa summoned them to the temple and offered the nuns red monastic jackets he had specially designed for them. Sometimes on a lull day, he would select an animation film about young heroes or heroines coming into their own and announce that a movie would be shown that night at the Kagyu Monlam Pavilion.

The two-week competition also carried a historical undertone, marked by the presence of three geshema judges who presided over the results, and a fourth one who helped the nuns refine philosophical points. Though nunnery dialectic institutes are quite active throughout the Himalayan region in all mayor linages of Tibetan Buddhism, it is only until recently that nuns have been allowed to act as judges in any monastic debate contest. They needed to first be allowed to take examinations for four years in order to earn the degree of geshema. The first class graduated just months ago.

The Karmapa’s reasons for inviting a group of them to the competition, was “first, to celebrate them becoming geshemas and the second, to become a role model,” for the nuns, said Khenpo Karma Choephel.

One of them was Geshema Lobzang Chodron, originally from the Spiti valley of Himachal Pradesh and a nun from the Jamyang Choling Institute in Dharamsala. She expressed the importance of debating with different nunneries and not just one’s own.

“They are both good in logic and confidence,” she said of the nuns’ performance. “To sustain that, it’s important that we have this kind of gathering.”

Key to sparking and sustaining their confidence, she added, was receiving advice from spiritual masters at critical times.

“If you consider here, just the very fact that the Gyalwang Karmapa presided over this gathering and offered again and again advice to the nuns, this is very good.

When it becomes very hard, some nuns might want to give up. So that is why it’s important to receive advice.”

When asked about the particular significance of studying for a nun, geshema Lobzang Chodron, who studied for 21 years before receiving her degree, encapsulated the Karmapa’s intention that the Kagyu nuns should receive the full opportunity to become appropriate vessels of the three trainings.

“Right now, for example, we are studying ‘Collected Topics’ and ‘Types of Reasoning’,” she elaborated, “and within these, the extensive meaning of the texts is not fully presented, but this is wisdom. It is the wisdom that distinguishes phenomena, or that which discerns what is good and what is bad, so that you won’t easily believe what you hear.

However great this wisdom becomes, to that extent ones own discipline becomes stable. Wisdom should help discipline and disciple should help wisdom.
If we have a stable discipline, then naturally meditative concentration will also improve. And for the three trainings to become stable, we need to meditate.”

Many of the nuns vividly remember the last advice they received from the Karmapa the evening of the ceremony awards. 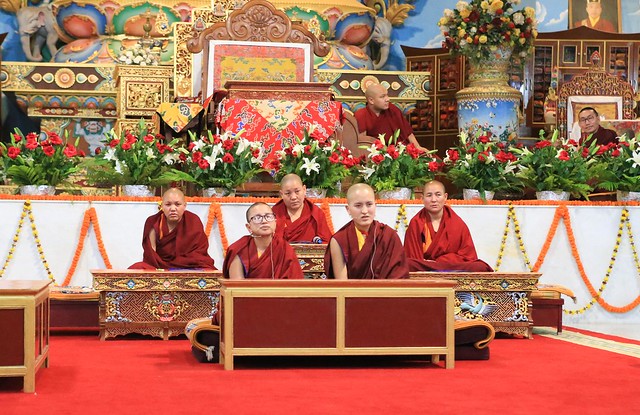