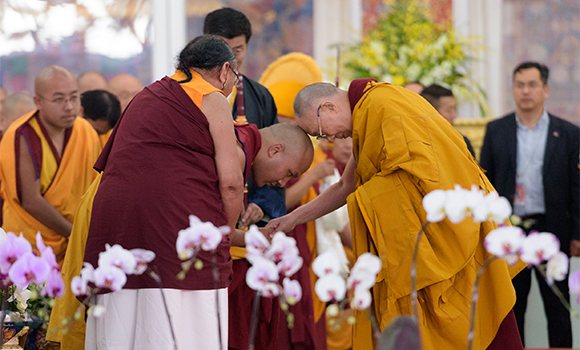 January 14, 2017 -Bodh Gaya, Bihar, India
On January 10th the Gyalwang Karmapa arrived at Tergar Monastery, his residence in Bodh Gaya, to attend the 34th Kalachakra empowerment bestowed by HH the Dalai Lama. 120,000 devotees from 90 different countries came to receive the well-known empowerment, which His Holiness is giving for the fifth time here at the Kalachakra Grounds.

In support of this special event, the Karmapa’s office of administration offered food and lodging free of charge to 4,000 people, including monks (mainly from Sera Monastery and Dzongsar Shedra) as well as lay devotees from the Himalayan region, poor school children and old people. Tergar is also a temporary home to the Tibetan Institute for Performing Arts, whose members use the spacious stage in the Monlam Pavilion for practice and store their costumes on site. They all are staying in the extensive Kagyu Monlam facilities at Tergar Monastery. Additionally, in response to requests, food is also being offered to people in need.

On January 13 and 14, the Karmapa gave massive public audiences in the Kagyu Monlam Pavilion to those who had come for the Kalachakra empowerment. Each day he individually blessed 10,000 people, many of whom came from the Himalayan region.

The Karmapa will stay from the middle of January to the middle of March at Tergar where the winter programs he organizes take place. The extensive schedule includes teachings, practice, empowerment, clinics to benefit the local community, and New Year’s celebrations. The general schedule is the following.

January 16, 2017–February 4, 2017: The twentieth Kagyu Guncho, the Winter Debates for monks, which continues from past years the program of debate and the study of Gampopa’s graduated path of practice (lam rim), the Ornament of Precious Liberation.

January 20 to 26, 2017: The fourth Kagyu Monlam Animal Camp, which provides free veterinary care for all animals from camels to cats.

February 7, 2017–February 8, 2017: The Grand Empowerment of the Five Deities of Chakrasamvara. Those receiving this initiation will make the commitment to recite the Four Session Guru Yoga at least once a day for the rest of their lives. The empowerment will not be webcast.

February 11, 2016: The Karmapa will give the transmission and explanation of the Eighth Karmapa’s Four Session Guru Yoga, which will not be webcast.

February 21, 2017–February 25, 2017: Garchen Gutor Puja, which are practices performed in the Tsurphu tradition to clear away obstacles.

March 2, 2017: Marme Monlam, an evening’s celebration of song and dance ending with an offering of lamps and prayers.