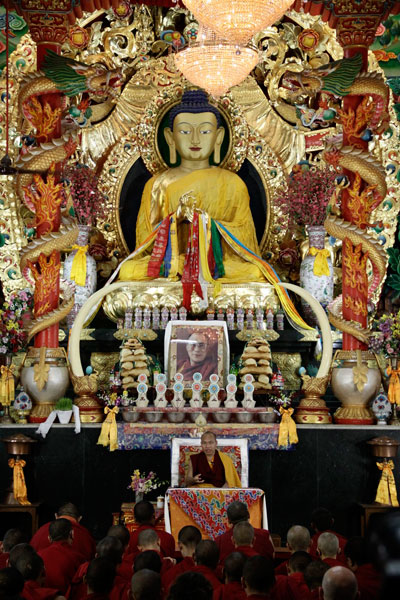 The Gyalwang Karmapa is currently on an annual springtime visit to his senior tutor’s monastery, the Vajra Vidya Institute, in Sarnath, outside of Varanasi. This is a special time when he receives private initiations and teachings from Khenchen Yongzin Thrangu Rinpoche, a highly respected Karma Kagyu master, who was appointed as his senior tutor by His Holiness the Dalai Lama.

This is the third year in a row that the Gyalwang Karmapa has given spring teachings to an audience of local Tibetan, Indian, and international students at the Vajra Vidya Institute. His students worldwide look forward to what has become an annual event in this highly auspicious place, where the Lord Buddha taught the Dharma for the first time after his enlightenment.

“How to become a good person through the wish to benefit others.”

SESSION ONE
A Good Heart is the Essential Foundation

His Holiness first acknowledged the sacredness and auspiciousness of Sarnath, where Lord Buddha taught the Four Noble Truths and then wished everyone a Happy New Year. He explained that the “Spring Teaching” planned for Varanasi would form part of a cycle of four teachings linked to the seasons. He assured all his Dharma friends, those in the hall and those watching the webcast, that they were all close to him.

Discussing how to become a good person is not difficult, he continued, however, it is difficult to integrate this ideal into one’s life in a practical way. There are very few people who actually put into practice what should be practised, even though it is achievable.

Whatever we do needs a sound foundation and developing a good heart as that foundation, for all activities including particularly study and the growth of knowledge, is of great importance. His Holiness explained how this emphasis on developing a good heart extends beyond Buddhism – it is embedded in the essence of ancient Asian cultures, in India, Tibet and so on. These cultures stress that first and foremost you should be a good person, an honest person, one with a sense of integrity, and thus the first stage is advice and training given in order to cultivate those qualities, and then this becomes the foundation on which education and other forms of knowledge are built. Otherwise, without that noble foundation, knowledge could become a source of danger. Knowledge on its own is not sufficient; it should serve some beneficial purpose, in achieving future goals, in benefitting one’s family and society at large. Given this cultural heritage, training to become a noble person is very significant, and it is meaningful both in a secular context and within the Dharma, where the aim is transformation of one’s mind, instilling that foundation of goodness within one’s self. Within a social context, we should assume a responsibility of care for those who are less powerful than ourselves, avoid jealousy when relating to equals, and respect those who are higher or worthier.

In this way, cultivating good intentions and good conduct forms a sound basis for other knowledge. In the modern world, however, the importance of an ethical basis for knowledge is often disregarded. People seek knowledge as a means of acquiring qualifications to become a doctor or a professor, or because it will lead to status or, more often, in pursuit of material gain. They fail to recognize that material possessions do not translate into happiness and well-being. The great Importance of cultivating the noble outlook of mind of the good person has been ignored.

The consequences of this discontinuity are evident in world history. Having developed a degree of knowledge and technical skills, nations have used this to overpower other weaker and less developed nations; they have launched wars, colonized, dominated and exploited them. Thus we need to reflect on the correct role of different fields of knowledge, education and skills, as the consequences of the misuse of knowledge are extremely frightening and dangerous for us all. Modern science, for instance, involves high levels of education and training resulting in advanced skills and expertise which give human beings great power, as seen, for example, in the case of nuclear energy. Nuclear energy has the potential to bring great benefit but, conversely, its abuse can lead to dreadful and fearful consequences. Thus, it is imperative that we reflect on the kind of foundation or cornerstone which should be in place as a basis when pursuing and applying technological and scientific development.

There are endless possibilities in the ways in which human beings can act, but the fundamental purpose of all our activities is simply two-fold: we want to rid ourselves of suffering, and we want to become happy. There appear to be innumerable methods but we have to establish the ones which will realistically work to bring about this goal. So, for example, if we compare the lives of ordained sangha and laypeople, we observe that, although there are obviously some external differences, the foundation has to be the same – a good-hearted person. This is what matters – the true winner in life is the one who experiences happiness and well-being. Whatever we do is irrelevant if it does not fulfill this aim.

One obstacle we face is our inability to feel empathy. We are unable to see that others have the same wants and needs as we have. His Holiness illustrated this with a story which had moved him deeply when first he heard it, a story set in the Second World War.

During a battle, two soldiers, an Englishman and a German, came face-to-face. They shot at each other until their bullets ran out, and then they grappled with each other in hand-to-hand fighting, both realizing that this would be a fight-to-the-death. Just as the English soldier’s strength began to fade, he remembered that his wife back home was going to have a child and he didn’t know whether it was a boy or a girl. This made him fiercely determined to live, and, with renewed strength, he plunged his bayonet into the German. As the German soldier lay there dying, he reached into his pocket and took out a photo of his young wife. She also was pregnant. Through gestures he communicated to the English soldier that he wanted him to take the photo and return it to the German’s widow after the war. This moved the English soldier greatly. However, when the English soldier returned home, his own hopes and dreams were dashed; he discovered that his whole family had been killed in a German bombing raid. But he kept his promise, went to Germany, and, in spite of many difficulties, met the wife of the German soldier and returned the photo to her. The end of the story was that they fell in love and got married.

The common desire of all human beings is the wish to escape suffering and have happiness, commented His Holiness, but we disregard that others have the same desires. Buddha told us not to harm others. We have to really think about this long and hard. If, instead, we allow ourselves to be influenced by the poisons of attachment, greed and hatred we can do great harm. Consider how millions of Jews were killed during the Holocaust. This horror happened here on our planet, not anywhere else.

The Buddha’s teaching that ordinary individuals work for the benefit of themselves while more highly evolved beings work for the benefit of others provides a clue to what it means to become a noble person. It happens that people who focus on the benefit of others are sometimes seen as interfering busybodies or otherwise faulted for not taking proper care of themselves. On the other hand, if we are realistic, when one is pre-occupied with one’s own well-being and self-interest, it is linked with arrogance and pride; it is as if we are the centre of the universe and only we matter. If we want to experience true well-being, we have to extend beyond ourselves and reach out to others. Only then can we begin to say that our lives are worthwhile. Further, this is the recognition of interdependence – that a common thread of interdependence connects us all.

His Holiness concluded that contrary to what some people believe, the essence of a meaningful life, meaningful both for one’s self and others, does not lie in being a tough person. It’s the reverse. First one needs to cultivate stability and gentleness of mind, and, with that as the foundation, move forward.