How to Free Ourselves from Suffering and Achieve Lasting Happiness 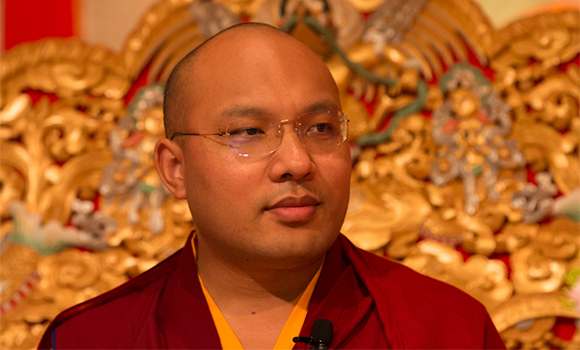 June 4, 2016 – Paris, France
Gyalwang Karmapa began the afternoon session with a short recap. He explained that the first two truths concern afflicted states, in terms of suffering and its origin. He then began an exploration of the third Noble Truth, that of the cessation of suffering.

He reminded everyone that there are two aspects to the truth of the origin of suffering— karma and the afflictions—and that the basis of all our afflictions is clinging to what we perceive as reality. “So we need to examine whether what we cling to as being true, as being real, is actually real or not” he explained. This is difficult because we are working from “the perspective of clinging to reality itself.” This way of thinking lacks the capacity to examine whether its objects actually exist in the way it thinks they do. For that reason, in order to examine whether what we perceive as reality is actually the way things are, we need to use another way of thinking. Then, after careful analysis, we will realise that ultimately phenomena do not exist in the way we have been perceiving them. Once we have realised this, we can understand that the way we cling to phenomena as being real is not the actual nature of how they are. Consequently, we will be able to “develop the great confidence that we can liberate ourselves from such fixation on reality and the confidence that we can liberate ourselves from the afflictions”.

When we say “liberation,” primarily what we mean is freeing ourselves from the afflictions by eliminating them. This is called “cessation” because, once we achieve this, suffering ceases. This is the third of the Four Noble Truths. What remains after we have eliminated the afflictions is also known as the “utterly pure aspect of phenomena,” and this is the happiness that we seek to attain.

“In this way, the Four Noble Truths give a complete explanation of how to achieve ultimate happiness, its causes and results,” His Holiness concluded, “and how to liberate ourselves from the suffering we do not want and its causes.”

The session ended once more with questions and answers.

The first question posed the problem of what to do when you feel happy and in control of your life, and find it difficult to see life as suffering. The Karmapa suggested that this was exactly the situation he had described in the morning’s teaching: failing to recognise suffering as suffering. We needed to be very clear about the three different types of suffering; suffering includes not just suffering but pleasant and neutral experiences as well. Things appearing to us as pleasant may still be suffering.
Further, he continued, we should ask ourselves whether we really do exercise control over our lives, because while we are under the power of karma and the afflictions, we do not have control. “If we want to liberate ourselves from the three types of suffering, and from samsara, then we have to liberate ourselves from the pervasive suffering of formation,” he concluded. If we do not want to liberate ourselves, it’s irrelevant.

Two related questions asked how to increase our inner joy and go beyond sadness. His Holiness replied that these were fundamental questions and difficult to answer. However, drawing on his own experience, he suggested that the labels we attach to an experience alter how we see it. By changing our perspective on difficulties we could generate inner happiness. Ultimately, “if we have inner contentment, we will naturally be happy”, he said.

The third question was how to satisfy everybody’s wishes and accomplish the benefit of others when it seemed that helping one person resulted in upsetting others. His Holiness commented that it is extremely difficult to satisfy the wishes of all sentient beings because they have so many diverse capabilities, interests and inclinations. One act or deed would not be able to achieve this.

The work of the bodhisattvas is to bring sentient beings what they want, and bodhisattvas do as much as they can. However, some things can be accomplished but others cannot. Because they have such extraordinary and vast bodhichitta and great courage, when they encounter things that are difficult to accomplish, bodhisattvas make the aspiration to be able to accomplish them in future. Many people asked the Karmapa for help, he said, and sometimes he was able to help, but not always. “I begin to understand why Chenrezik has four arms or a thousand arms,” His Holiness commented, referring to the huge thangka of thousand-armed Chenrezig hanging to the right of his throne. “Each arm represents something he can do to benefit others, and the thousand arms are so he can multi-task”. It is the capability we need in order to be able to satisfy the wishes of all sentient beings.

It is important to first see whether or not we can accomplish their wish, the Karmapa advised, and if we are not able to do so, we should make the sincere aspiration to be able to do so in the future.
There were several questions about the pervasive suffering of formation, asking for examples. His Holiness quoted from the Buddhist scriptures: “When you have a hair in your palm you can barely feel it; when it gets in your eye, it is extremely painful.” For ordinary beings, the pervasive suffering of formation is like a hair in the palm of the hand, but for the noble ones it is like a hair that gets in the eye.

There was then a question about the best way to help refugees during the current problem in Europe. The Karmapa referred first to the great European tradition of accepting refugees ever since the Second World War. However, he agreed, now it was particularly difficult because of the great numbers; there had been no time to prepare and make plans, and there were cultural differences, so the future was uncertain. Many of these refugees had come because of the civil wars and conflicts in the Middle East, for which Western countries share some of the responsibility, he observed. The real need, therefore, was to find a way to resolve those conflicts, otherwise refugees would continue to arrive.

Responding to a question on collective suffering, the Karmapa pointed out that in Buddhist literature there were many examples of this during the time of the Buddha. Many people made the mistake of viewing karma in a very limited way such as connections between individuals. On the contrary, the workings of karma are vast and extend across space and time. “We have been making these connections with sentient beings from beginning less time…across the entire universe,” the Karmapa elaborated, and given this huge inter connecting karmic web, it is imperative that we take responsibility for ourselves and our actions.

The afternoon session finally concluded, and His Holiness left the stage. The audience reluctantly drifted from the hall to cafés, restaurants, or their hotel rooms, and the security staff prepared for the next event. Outside, in the grey afternoon, lines of Tibetans were waiting to come into the conference hall for a special audience organised for Tibetans living in France. The Gyalwang Karmapa’s work for the day was not yet finished.