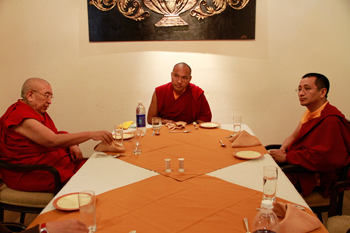 On the third day of Losar His Holiness Karmapa had lunch at the Ramada Hotel hosted by Vajra Vidhya Institue. Khenchen Yongzin Thrangu Rinpoche, Dzogchen Ponlop Rinpoche and the entourage of His Holiness were invited for the Lunch.

Later at evening His Holiness performed a special Guang Gong Puja in the evening outside in front of Vajra Vidya Monastery’s main shrine hall. Khenchen Yongzin Thrangu Rinpoche and Dzogchen Ponlop Rinpoche attended the prayers. The evening concluded with a burst of fireworks.

His Holiness the Karmapa will be giving Spring Teachings from the 9th through the 12th of March at Vajra Vidya Institute in Sarnath. The theme of the teachings will be “How to Become a Good Person through the Wish to Benefit Others”. The teachings will be held in the afternoon, from 4 to 6 pm and will be webcast live and available at http://www.karmapa-teachings.org. His Holiness will teach in Tibetan, which will be translated into English, Hindi, German, French, Spanish, Polish, Chinese, and Vietnamese.

Sarnath is the site where Lord Buddha first turned the wheel of Dharma after becoming enlightened. Students from all over the world have begun arriving to receive dharma teachings from His Holiness in this particularly auspicious place. Teachings are open to the public at no cost but advance registration is required due to limited seating.