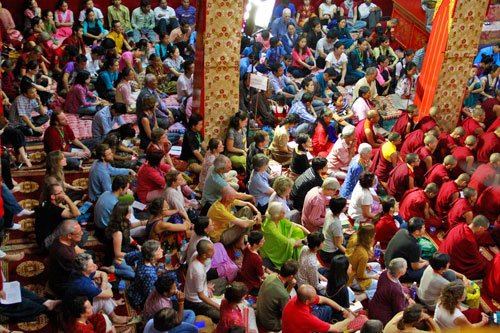 There were people from forty-two nations gathered in the main shrine room at Vajra Vidya Institute to hear the second day of the Gyalwang Karmapa’s Spring Teachings, and a further 1400 were logged on to watch the webcast.

“How to become a good person through the wish to benefit others.”

To begin His Holiness greeted everyone warmly before resuming his discourse on how one becomes a good person. He began by emphasising that human beings are inherently wholesome, innately noble and virtuous, yet because of certain causes and conditions, this innate goodness becomes hidden and is no longer expressed. We have to recognise our true nature and reclaim it. As the Buddha taught, our inherent nature is pristine, like the sun veiled by the clouds. The sun is there but is obscured by the clouds. It is not a case of being brainwashed or conditioned into somebody new, but rather of recognising our inherent nature as it is.

It is obvious that all people wish to have happiness and avoid suffering, and a sense of warmth towards others, a desire for harmony and intimacy with others is the norm. Yet, because we are influenced and conditioned by our upbringing and circumstances, outlooks and viewpoints vary, creating differences between people. Within Tibetan society, for instance, we are all Tibetans but people raised in the Kagyupa tradition feel affinity for that tradition and distance from other religious traditions, simply because of the environment in which they have been raised. This might seem trivial or insignificant but such differences can have a major impact on and consequences for society, resulting in total disregard for other people. We no longer consider their happiness and well-being as important, and, in extreme circumstances, they may be persecuted, tortured and so on. Or, if one belongs to a particular political view, one might be so influenced that one becomes a fanatic. Consequently, it is very important for us to be on our guard and be cognisant of the influences and conditionings in our environment.

However, although we have been subjected to various influences, good and bad, in our upbringing and environment, there are many possible outcomes to any situation, and we still have choice. If someone is given five apples, he can eat all five apples himself, and limit himself to the experience of tasting apples! On the other hand he could choose to eat one, and, because it was delicious, choose to eat a second one, but then give away the other three: one to A, one to B and one to C. Later, when A has grapes, he will share them with him. When B has oranges, she will share them with him. When C has mangoes, he will give him one. Simply by choosing to share his apples he now has the opportunity to taste different fruit. Similarly, we have the potential to make our lives more flavourful. If, on the other hand, we are wrapped up in self-interest, we’ll eat all the apples! If we want a more meaningful life we have to reach out to other people, in which case having five apples at our disposal becomes a source for increasing happiness. The essential difference lies in our own attitude.

His Holiness then told a true story about a well-known investigative journalist who went to a village to write about their way of life. On the way he met a little shepherd boy, five or six years old.

This story circulated and became a joke. Some dismissively said, “That’s how simple villagers lead their lives.” But others who were more reflective thought, “These uneducated villagers have plans for the future, so we who many more opportunities should also have a plan!”
If we can think beyond ourselves, our lives can become more meaningful. For example, someone whose goal is to make money has a choice: if they make a nine rupee profit they can choose to keep it to themselves or choose to share it with nine other people. In the latter case, they have created some benefit for others.

The Buddhist tradition generally and the Mahayana in particular expresses the view that our life is limited but, with the correct attitude, it is possible to use our lives to bring unlimited benefit to an innumerable number of beings. Given that our lives are brief, characterised by impermanence and uncertainty, every second which passes becomes precious: it is important to make every second count. Buddhist teachings state clearly that desiring happiness for one’s self , the habit of self-cherishing, is the root of unhappiness, whereas the cherishing of others leads to lasting happiness. So, in order to make our lives significant and meaningful we need to work for the benefit of others.

In this world generally, whether it is between nations or within communities, everyone seems interested in achieving their own selfish aims while neglecting the interests of others. Yet, in terms of both suffering and well-being, we have to share this planet. We depend on other people for the food we eat, for the clothes we wear. Indeed, we depend on other sentient beings for our very existence, so, even from a selfish viewpoint, we should be concerned for their well-being, otherwise we ourselves won’t be able to survive. Even the air we breathe is dependent on other phenomena. Everything we require to stay alive is dependent on the existence and well-being of others. This is the way things are – everything that exists occurs interdependently. If we can realise this, we have a starting point from which to begin to benefit others.

More often than not, until a disaster happens, we are unprepared to put preventive measures in place. So much deforestation has taken place, and nobody protested. We tend to have the attitude- it doesn’t concern me. I’m not a tree, it doesn’t concern me! So forests continue to be cut down. Toxic waste goes into the water and the water becomes polluted, and then we are surprised that so many fish have died unexpectedly, but no one takes a stand. We don’t see a connection between toxic waste, polluted water, and the water we drink, so, as we are not directly affected, we are not concerned. But, in the end, pollution spreads, and it is our drinking water which is being polluted.

The loss of forests has led to reduced rainfall so there is less drinking water available, but when the trees were being cut, we weren’t worried. Now it has become critical. We don’t speak out, we are uninterested, until something serious happens which directly affects us.

If we want to help others, the first step is to transform ourselves rather than to change others. It might even be dangerous to try to change some people! First we have to tame our own minds, become a good person, and that in itself is a big step–to have created one good person in the world. Sometimes, we are eager to give advice to others, but this could be inappropriate interfering. We have to mind our own business because, first, we have to work on ourselves, develop a degree of experience and stability and then, possibly, at a later stage, we can advise others.

There’s a story about minding your own business that might make you laugh.

Once upon a time in Tibet there was a man who always warned his neighbours to keep their noses out of his affairs, so he was given the nickname Mr Mind-Your-Own-Business.

“Tell me,” he asked, “You always tell us never to interfere. What if it’s of benefit to the other person, should you interfere then?,

“No, you should mind your own business,” Mr Mind-Your-Own-Business replied.

Of course, by the time he got home, the bag was empty. So he accosted his neighbour,
“You saw what was happening. Why didn’t you tell me?”
The neighbour said, “I’m supposed to mind my own business.”

It is, however, not possible to benefit all beings through our body, yet we can use the potential of our mind by reflecting on the causes and conditions which make our existence possible, then we will realise that it is because of others that we are alive. It is then possible to have a genuine sense of gratitude towards others and feelings of closeness, kindness and affection, a very important step in benefitting others.

Though I cannot fulfil the benefit of others according to the noble wishes of the Buddhas and Bodhisattvas, and can do very little to benefit others through my body and speech, concluded His Holiness, yet, through my mind I generate a strong feeling of affection for others and feelings of caring for others. All of you, who have education, skills and the opportunity to interact with others, should be able to achieve a great deal of benefit for others.

Evening Puja to Remember the Anniversary of March 10th Uprising

Gyalwang Karmapa led special prayers for the well-being of Tibet, followed by a Mahakala Puja, on the 52nd anniversary of the Lhasa Uprising.

The prayers were attended by several hundred monks and nuns, Tibetan lay people and international students.