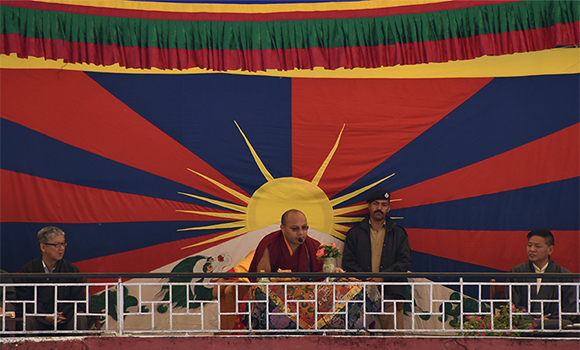 Greeting everyone present, the Gyalwang Karmapa commented, “Though I’m quite busy these days, I wanted to make time to come today and offer my respects and support. Fifty-five years have passed since the school was founded and it has undergone tremendous development during this time. These years have entailed a great deal of effort, not just for a few days, but year after year of continuous, dedicated work on the part of the administrative staff, the teachers, and the students.”

Turning to the value of the school being celebrated today, the Karmapa remarked that “it supports the greater family of Tibetans, the common good of Tibet, and fulfills the express wishes of His Holiness the Dalai Lama. All of these will bring wonderful advantages in this life and the next.” He noted that all the efforts made to care for and sustain T.C.V. have had an immense and great benefit. For all of this he expressed his profound thanks.

The Karmapa then turned to the situation of Tibetans in exile and mentioned that there is a tendency to become a bit complacent and forget why they had left Tibet: What was the situation in Tibet when they had to flee? What was the karma that caused them to leave? He counseled the Tibetan people to keep in mind their great goal: To develop their own education and physical well-being so they could return to their homeland, help it to make positive changes, and create a superb nation of the Tibetan people. For this to happen, pedestrian efforts are not enough: genuine, inspired study is needed. “Our goal is huge,” he said, “different from others, so we need to fire our spirit and increase our efforts, doing more than before.”

The Karmapa noted that in the future, the situation of the Tibetans would be increasingly difficult: His Holiness the Dalai Lama has turned eighty and one does not know what the future will bring. He counseled, “Now it is important to think about what might come. We must preserve Tibetan culture, and not lose sight of what it means to be Tibetan.”

In closing, the Karmapa expressed his thanks for being invited to the anniversary celebration and extended his heartfelt gratitude to all the staff and teachers of the Tibetan Children’s Villages.