Dharma for This World of Ours 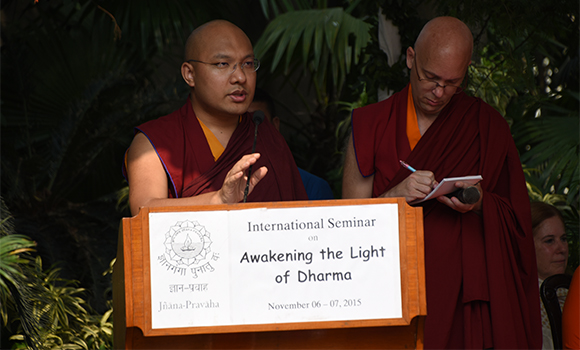 The sounds of Karmapa Khyenno played through the white canopies set out on a sunny green lawn while the Ganges flowed nearby along its ancient course. This peaceful landscape of the Jnana-Pravaha Centre was the setting for a dialogue between spiritual teachers entitled, Awakening the Light of the Dharma: How to Uphold Dharma in the World Today. The Gyalwang Karmapa gave the keynote speech at this meeting focused on issues close to his heart.

The gathering brought together spiritual leaders from a variety of Buddhist and Hindu persuasions, Sufi, Jewish, and Theosophist teachers along with professors from Benares Hindu University joined by representatives from other academic and cultural institutions. The conference was mainly sponsored by the Jnana-Pravaha Centre and the Global Peace Initiative of Women (GPIW), based in New York. Its founder, Dena Merriam, introduced the conference speaking from her long-term commitment to inner development as an essential element in the positive transformation of the global community.

She spoke of the pervasive violence in the world today toward the women, the environment, and animals. To deal with this problem, she said, we have learn to think in terms of the whole web of life; we need a long-term vision, an understanding of the laws of cause and effect along with an increased respect and humility towards the earth’s community of life. For this to happen, an inner transformation has to come first before an external one.

Marianne Marstrand, Executive Director of GPIW, introduced the Gyalwang Karmapa as someone who expresses a deep concern for the earth and her living systems and one who shares his wisdom and insight with young people around the world so that they do not lose hope in these times.

After extending his greetings to all the Dharma friends who had gathered, the Karmapa remarked that he had come to the conference because it was focused on “developing mutual understanding between different spiritual traditions and inspiring their sacred perception of each other.” Sadly these days, there are many conflicts and misunderstandings based on the various religious traditions and we cannot postpone dealing with them. “We can see with our own eyes the difficulties in this world so even if we wanted to hold back and not do anything, we could not. If we can take small steps together, we can accomplish great things. This is critical for the peace of the world.” The Karmapa also emphasized that the importance of making good connections between individuals, “only then can we come together and do something great.” These relationships, he noted, are facilitated by a pure and spacious attitude.

“One of the most important things religious traditions can do,” the Karmapa remarked, “is to shift people’s attitudes. For example, science has given clear messages about the damage being to our environment, but this has not helped to change things. People’s attitudes and motivations have to transform, and religious leaders must show the way here. This means that all of us engaged in the religious traditions have a great responsibility.”

The Karmapa closed his talk by saying how delighted he was to see Dharma gurus and students at the conference and offered his best wishes and prayers that all be auspicious. Afterward, he took questions from two students.

The first one asked, “In this present time, how far are the teachings and beliefs of Buddha alive and relevant?”

The Karmapa responded, “In looking at Buddhist principles, we can see that there are some that stem from tradition and others that have turned into customs. We have to examine and see what is appropriate and helpful for the present time.

“If we look at the essence of Dharma,” he continued, “we can see many aspects that are very relevant–love and compassion, having few desires and being content, the understanding of interdependence, and mindfulness meditation.” In addition, the Karmapa said that the way Buddhism is taught is crucial: “Teachers must teach in tune with our contemporary world so that the Dharma matches the needs of the people who are living here and now.”

The next questioner asked: “What role can Buddhism play in insuring and promoting gender equality?
The Karmapa replied: “When the Buddha was present on this earth, he gave both women and men the opportunity to practice in four different ways: through the vows of full ordination for both men and women as well as lay vows for women and men. These four types of vows for the lay and ordained sangha resemble the four pillars supporting a house.” However, the Karmapa noted, this situation has changed over time. For example, the tradition of full ordination for women disappeared in Tibet.

In general the Karmapa stated that exploring philosophical views on the subject of equality for women or passing numerous laws will not bring the changes needed to establish equality. The rights of women, he said, are part of the basic rights of human beings. All living beings have the right to be happy and to avoid suffering, so if we can truly cherish and sustain these basic rights, equality for women will come. On this positive note, the Karmapa closed his presentation.

Khenchen Thrangu Rinpoche, one of the Karmapa’s teachers, then spoke and emphasized the importance of pure motivation during interfaith dialogues and also the need to sustain the Dharma so that it is available over time. Human beings have the special faculty of discerning intelligence, which allows them to change what is negative and develop what is positive. In doing so they can benefit all forms of life. So it is essential to preserve our religious traditions and let them flourish for the benefit of all living beings.

During this first morning of the conference, the esteemed speakers also included Sri Jagadguru Dr. Chandrashethar Shivacharya Mahaswami from Varanasi, Radhanath Swami, a teacher of Bhakti-yoga, and the famous woman teacher Anandamurti Gurumaa. The conference will continue through November 8 with further presentations and discussions.