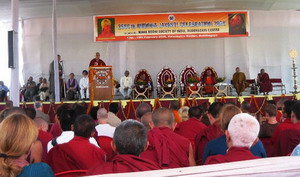 HH Karmapa addressing the attendees of the Buddha Jayanati in Bodhgaya on February 19, 2006, celebrating the 2550th anniversary of the Buddha

His Holiness arrived in Bodh Gaya from Varanasi on 17th February, to attend the 2550th Buddha Jayanti Celebration, at the invitation of the Maha Bodhi Society of India. Along with his entourage, His Holiness reached the Mahayana Guest House in the early afternoon, where he was received by Ven. P. Seewalee Thero, Bhikkhu-in-charge, MBSI, Bodhgaya center at the main gate of the Guest House, who offered a khata to the Karmapa.

The next morning, His Holiness visited the Maha Bodhi Temple and offered flowers and fruit to the main image of the Lord Buddha. He also offered a robe to the statue and recited a short supplication prayer. His Holiness than observed the activities aroung the the main stupa, including the ongoing month-long Tripitaka Chanting by venerable monks from different countries, which included Sri Lanka, Thailand, Myanmar & India.

The concluding ceremony for the week-long celebrations of 2550th Buddha Jayanti celebration was on February 19th. HH Karmapa was the Chief Guest of the Celebration, at the International Inter-Religious Dialogue Conference, held at the Kalachakra ceremonial grounds. The theme of the concluding conference was “Inter-religious understanding and tolerance, with special reference to the teachings of the Lord Buddha – a need of mankind.” After the arrival of His Holiness in the morning, Ven. Dr. Rewatha Thero, General Secretary MBSI, welcomed the Karmapa with a khata offering. The distinguished guests joined in lighting the ceremonial lamps, an invocation was given and a welcoming introductory speech was made by Ven. P. Seewalee Theero. Then representatives of the world’s religions, including Hindu, Jain, Islam, Sikh and Christian, gave their remarks regarding the views of their traditions. His Holiness concluded the talks with his own discourse on inter-religious dialogue.

The presidential address was given by Ven Dr. Rewatha Thero, Gen. Secy. MBSI and a vote of thanks to all participants was extended by Mr. A.H.Khan, Organizing Secretary of the Conference.

In the late afternoon, His Holiness was invited to the Meditation Park to ring the Peace Bell at the Maha Bodhi Temple. Afterwards, His Holiness lit the butter lamps and joined the assembly of monks and others under the bodhi tree to chant the Keraniya Metta Sutta (loving-kindness) by the venerable Maha Sangha. The ceremony concluded with His Holiness chanting a prayer for the World Peace.