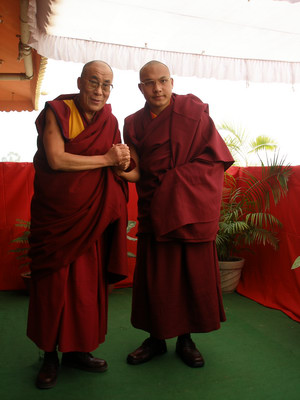 The Dalai Lama with the Gyalwa Karmapa at Vajra Vidhya Institute in Sarnath on December 17, 2006

On December 17, 2006, His Holiness the Dalai Lama arrived at Sarnath airport Sunday noon to give religious teachings beginning 19th December at the Central Institute of Higher Tibetan Studies (CIHTS) in Sarnath. His Holiness the Gyalwa  Karmapa  received him at the airport.