On New Year’s Day 2006, His Holiness the Gyalwa Karmapa conducted a refuge ceremony, giving refuge vows to the all the disciples gathered at Vajra Vidhya in Sarnath for the teaching. His Holiness also offered a very special New Year’s present to the gathering of sangha and lay devotees: a new composition of a Supplication and Offering to the Guru presented to each disciple after the teaching. His Holiness himself designed the booklets on the computer, and signed each printed booklet containing the supplication.

To further commemorate the occassion, the Tsurphu Labrang offered a ceremonial rice & tea to entire students as a New Year celebration. His Holiness hosted a New Year’s luncheon with Ven. Hai Tao and two other mahayana masters, along with HE Gyaltsab Rinpoche, Ven. KhenchenTrangu Rinpoche and Bo Khangkar Rinpoche.

His Holiness’s presence at Vajra Vidhya Institute in Sarnath, the site where Lord Buddha Sakyamuni first started teaching the Buddhadharma, is part of his 2005 – 2006 Winter tour (click here for schedule). – Karma Woser Rapten

On December 27th, His Holiness bestowed the empowerment of 1,000 Arm Chenrezig to everyone gathered at Vajra Vidhya, at the request of Ven. Lama Shedrub and dharma students from the New Zealand Dharma Center. Numerous disciples gathered in the main shrine hall to receive the empowerment. On December 28th, Ven. Master Hai Tao and disciples from Taiwan visited His Holiness at Vajra Vidhya and met with him. His Holiness also gave blessings and answered questions. In the afternoon, His Holiness gave special instructions about monastic discipline to all monks and nuns scheduled to attend the Kagyu Monlam in Bodh Gaya.

On the 30th, His Holiness began a five day teaching on the “Four Foundations,” at the request of the Hwa Yue Foundation of Taiwan. Many international students are present for His Holiness’s teachings, with numerous students from Taiwan, Hong Kong, Canada and the United States, as well as other students from Singapore, Malaysia and Korea. Ven. Khenchen Thrangu Rinpoche is also teaching in the afternoons. – Karma Woser Rapten

His Holiness is currently staying in Vajra Vidya Institute in Sarnath, presiding over the Annual Kagyu Winter Program of Philosophy and Debate (Karma Gön Chö). At the request of the International students in Sarnath, His Holiness gave a short teaching on Christmas Day. The following is a summary:

His Holiness began by pointing out that last Christmas passed while he was in Bodhgaya and now he was teaching on Christmas in 2005. A whole year has gone by with the natural passing of time. His Holiness said that since none of us can predict what will happen by Christmas 2006, his advice would be that instead of eagerly waiting for the next time of celebration, we should instead focus our energies on any important aspirations and objectives that we may have, and try to fulfill them.

His Holiness felt that most people present were Buddhist. Many Buddhists talk about ‘karma’ as if karma is somehow unchangeable. However we should realize that 70-80% of karma is actually what we create. The remaining lesser percentage involve things and events that are not in our control, such as the passing of time. There also include some cases where karma has ripened beyond the point where it can be changed. His Holiness gave the example of a person on board a aeroplane ready for take-off. At that point, it might be too late for that person to change his or her mind about flying, but there was a lot of freedom of choice within the process of buying the ticket, getting to the airport, passing through the security checks and the like. Karma is a creative process and has a lot of flexibility, so we certainly do have some control over what we can accomplish within a certain period of time.

His Holiness said that whether one will accomplish the state of complete awakening is entirely dependent on us as individuals and that all of us are fully equipped with the potential to achieve that enlightenment. He expressed his sense that whenever he teaches Dharma, it is with the hope that it acts as a cause for us to appreciate that potential and perhaps that we might experience a sense of urgency to put this potential into practice. His Holiness felt that many of us have may have aspirations and objectives that remain currently unfulfilled and aspired that his words may inspire us to gather renewed conviction to pursue and fulfill them.

Then with a touch of humour, His Holiness noted since he was speaking on a Sunday, which is usually a day off, and that it was Christmas day as well, he had not prepared to so much. So His Holiness advised everyone simply to relax. In general, we should learn to relax the conceptual mind, because it is only within such a relaxed atmosphere that real communication takes place.

In conclusion, His Holiness expressed the aspiration that, through his sincere good wishes and prayers on this occasion, the unfulfilled aspirations and objectives of everyone will be fulfilled. – Karma Woser Rapten

His Holiness arrives in Varanasi for the Karma Gön Chö Winter Retreat for Debate and Logical Study (December, 2005) 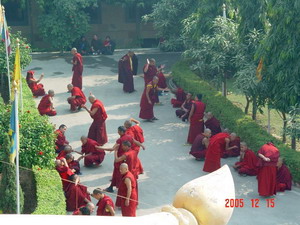 On December 13th, His Holiness traveled from New Delhi to Vajra Vidhaya Insititute in Varanasi. He was welcomed at the Varanasi airport by HE Gyalstab Rinpoche and the Ven. Khenchen Trangu Rinpoche. A large number of disciples also gathered at Vajra Vidhya Institute to receive His Holiness’s blessing.

His Holiness is at Vajra Vidhya to preside over the Karma Gön Chö, a winter retreat for all monks from different shedras (Buddhist universities) who which to particpate in intensive debate and logic. His Holiness began by giving teaching to all the monks on “Tsema Rikchung Gyato” composed by Seventh Karmapa Chodrak Gyatso.

Monks at Vajra Vidhya form a welcoming procession for His Holiness who arrived in Varansi on December 13, 2005

His Holiness’s presence at the Karma Gön Chö to Vajra Vidhya Institute in Varanasi is part of his 2005 – 2006 Winter tour (click here for schedule). – Karma Woser Rapten