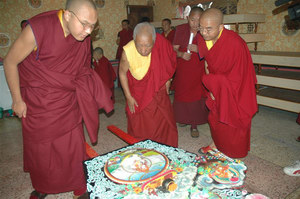 His Holiness, Ven. Mingyur Rinpoche and Khenchen Tsultrim Gyamtso Rinpoche (middle) inspect some of the sculpture offerings being prepared for the Great Kagyu Monlam

His Holiness the Gyalwang Karmapa arrived in Bodhgaya on December 19, for the next leg of his 2006 fall-winter tour. The Karmapa was received by Ven. Mingyur Rinpoche and Khenchen Khenpo Tsultrim Gyamtso Rinpoche at Tergar Monastery. The Karmapa began his activity in Bodhgaya by making offerings at the Mahabodhi Temple, which commemorates where Shakyamuni Buddha attained enlightenment. The head of the Mahabodhi Society welcomed him and escorted His Holiness inside the main shrine hall. His Holiness performed a short puja and circumambulated the temple three times, then headed to the Bhutanese Temple. There His Holiness checked the elaborate tormas and butter sculptures (offerings made out of butter) prepared for the Great Monlam Aspiration of the Glorious Unequaled Kagyu Sangha (Pal Nyammay Kagyupay Sangha Monlam Chenmo), over which the Karmapa will preside. He was joined there by Mingyur Rinpoche and Khenchen Tsultrim Gyamtso Rinpoche. Later in the afternoon, His Holiness gave an audience at Tergar Monastery to international followers. – Tashi Paljor