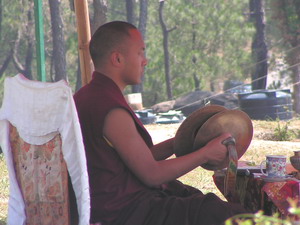 On June 26, 2005, His Holiness became 20 years of age (21 years according to the Tibetan counting system). The program for His Holiness’s birthday commenced at 5:30am with a ceremony at Gyuto in which monks offered long life prayers for His Holiness. Afterwards, a song and prayer were offered by disciples of the Karmapa from Taiwan. Events continued throughout the day.

Earlier in the month, on June 20th, His Holiness the Gyalwa Karmapa consecrated the new Tinkar Chodey Institute in Gopalpur, near Dharamsala, being constructed by Khenpo Rinchen Dhondrup. The Karmapa visited and blessed the construction which is currently underway.