The Karmapa is in Sarnath as part of his his Fall-Winter tour by traveling to Sarnath, Varanasi, Uttar Pradesh, where he is presiding over the Karma Gön Chö, the Winter Retreat for Debate and Logical Study, held annually at Vajra Vidhya Institute.

The Karma Gön Chö began this year on November 21st and concludes December 20th, 2006. Throughout the one month program, teachings will be given by both His Holiness Gyalwa Karmapa as well as Venerable Thrangu Rinpoche.His Holiness arrived at the Vajra Vidya Institute in Sarnath, Uttar Pradesh on November 19th, 2006. Venerable Thrangu Tulku Rinpoche and monks from the Vajra Vidhya Institute Shedra (monastic college) welcomed the Karmapa’s return with traditional offerings of saffron sweet rice and sweet milk tea.

+Larger photoIn the misty morning air in front of the Damekha Stupa at Deer Park in Sarnath, His Holiness led the assembly in prayer.

To commence the Winter Retreat , His Holiness addressed the monastic representatives assembled at Vajra Vidhya and explained the origins of the Karma Gön Chö. During the Institute, pandita monastics thoroughly examine the views of the Holy Dharma as held by the great Kagyu masters and the forefathers of the lineage, using the techniques of Buddhist debate passed down from the great pandits of India.

On the 27th, he began meetings with the Great Kagyu Monlam organizing committee. Between sessions, the meeting representatives were offered a lunch at the nearby Radisson Hotel. On the 30th, His Holiness, Ven. Sangye Nyenpa Rinpoche and the other Kagyu Sangha members assembled at Vajra Vidhya held a birthday celebration for Ven. Thrangu Rinpoche, as he turned 74 years of age. 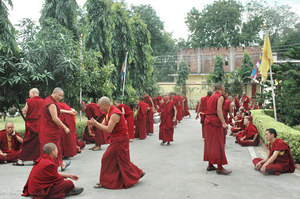 On December 8th, the Karmapa led an assembly of monks, bhikshus and lay persons to Deer Park, where the Buddha first began his teaching by Turning the Wheel of the Dharma. Before the Damekha Stupa, which is thought to be on the site where Ashoka built a stupa commemorating the Buddha’s teachings, His Holiness led the assembly in prayer and renewed their bodhisattva vows. His Holiness was joined by Ven. Sangye Nyenpa Rinpoche, VV Khenchen Thrangu Rinpoche and VV Khenpo Tsultrim Rinpoche. On December 12th, His Holiness gave teachings about the Mahamudra (chagya chenmo), as well as the great Kagyu lineage and its masters, at the request of the Kagyu Association of Sarnath University for Higher Buddhist Studies. During the talk at the Vajra Vidya Institute main shrine hall, His Holiness mentioned his happiness at having the opportunity to address students from the Institute for Higher Buddhist Studies at Sarnath University.- Tashi Paljor More . . .