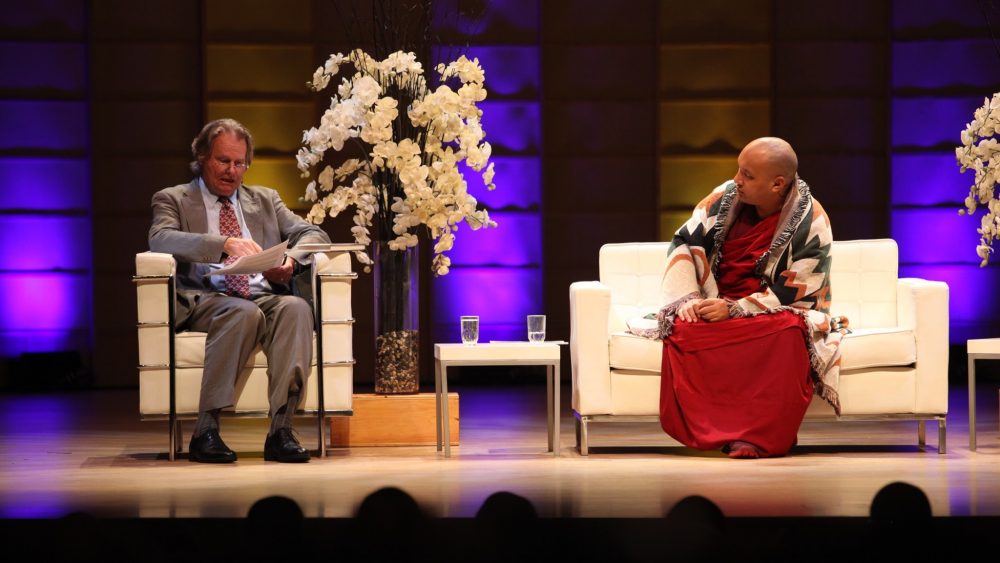 His Holiness and Wade Davis – In Dialogue in Vancouver

The afternoon’s conversation was engaging, insightful and inspiring and also had a relaxed and intimate fireside feeling.

His Holiness received the blanket with a thumbs up, visibly moved. “For all of the members of the First Nations here today there is a very long distance between Canada and Tibet, but I feel there’s a real closeness in our hearts and in our minds.”

His Holiness came to Vancouver, Canada, to speak with Mr. Davis about His Holiness’ most recent book: Interconnected: Embracing Life in Our Global Society. As Mr. Davis stated, the book is not so much about the Buddha dharma but about “key challenges of our age examined through the Buddhist way of thinking.”

Mr. Davis started out the afternoon by underscoring our collective good fortune to be in face-to-face dialogue with His Holiness – something we sometimes take for granted. He spoke of one trip to Lhasa, Tibet, where he had been shown a hidden devotion chamber dedicated to His Holiness the Dalai Lama – something for which this Tibetan woman could have been imprisoned.

Mr. Davis mentioned (regretfully, he said, as it caused her pain) that he’d had the good fortune of meeting the Dalai Lama. “Instantly she began to weep,” he said. “In that moment I knew just what it meant for the Tibetan people to be in the presence of the Dalai Lama and the Karmapa.”

Throughout the afternoon dialogue, all kinds of issues were laid on the table, from consumerism and cultural diversity to apathy and courage.

His Holiness said that because of the social imprints that society creates within us we have “old ways of looking at things” and that this habituated way of seeing the world keeps us from realizing our interconnectedness and “how things actually are.”

Mr. Davis, referring to His Holiness’ book, spoke about the emotional disconnection and isolation that many people feel when using the internet, despite the connectivity it seemingly creates. “We’re engaging in pixels and nothing more,” said Mr. Davis.

His Holiness said that actual connection – the emotional connection – is what happens when people are together. “When you see a friend you speak to that friend, you hold their hands,” he said. He said the technology is just a tool and doesn’t represent the actual connection. “This difference gives us one of the greatest challenges in this era.”

Mr. Davis spoke of His Holiness’ strong stand on the environment, quoting from the book: “’There is no basis in thinking that the earth’s water belongs to some people more than others. Our thirst is felt equally.’”

“I’m fascinated by His Holiness’ childhood. Is that where your environmental commitment came from?”

“I think so,” answered His Holiness. “Before being Karmapa I had an opportunity to live a very traditional life, very close to nature.” He was eating the same types of foods and wearing the same style clothes that his ancestors had always relied on.

But at the age of 7, His Holiness’s life changed dramatically when he was recognized as the Karmapa and already at the age of 8 he was giving teachings to 20,000 people, said Mr. Davis.

Subsequently Mr. Davis moved the issue of consumerism onto the table and asked His Holiness to comment on the following sentence from the book: “Greed is a hunger that only intensifies the more we feed it.”

His Holiness responded by saying that we humans are generally not able to distinguish between “wants and needs.”

“We get them mixed up,” he said, adding the society increases our desires and that television and newspapers makes it seem “like we need to have everything.”

“If there were five or six Earths we still would still have difficulty fulfilling our desires,” His Holiness said.

Mr. Davis then moved to a discussion about cultural diversity. “The fundamental lesson of anthropology is that every culture has something to say and deserves to be heard,” he said.

Mr. Davis stated that many of the world’s voices are not heard and that in this day and age only half of the world’s 7000 languages are spoken to children. He asked His Holiness: “What do we need to be doing to address language loss, erosion of culture and supporting the rights of all people to have their voices heard?”

His Holiness gave a comprehensive answer. He said that most people only think of politics when they consider the region of Tibet, but that in fact the region has the largest reserve of freshwater, glaciers and ice after the North Pole and South Pole. “So what happens in Tibet affects the entire continent of Asia.”

Mr. Davis quoted another memorable line from the book: “Apathy kills more than any other single disease,” he read. “What did His Holiness mean?” he asked.

His Holiness responded by saying that human beings are naturally born with a capacity for empathy but that this is diminished as we grow older. Our lack of empathy is apparent, he said, given the many people in the world without food and clothing and subjected to terrors of war.

“We’re lacking in affection in terms of our practical actions,” he said. “If we look at the world there is no reason for so many people to suffer so terribly.”

His Holiness said that when we think about changing the world we often think about how we can change how certain groups of people think. Typically we look outside of ourselves. “What’s most important is we look inside and see how much can we change ourselves,” he said.

Mr. Davis ended the dialogue on the theme of courage, a concept that runs throughout the book.