The Gyalwang Karmapa Leads Three Days of Puja in Sarnath 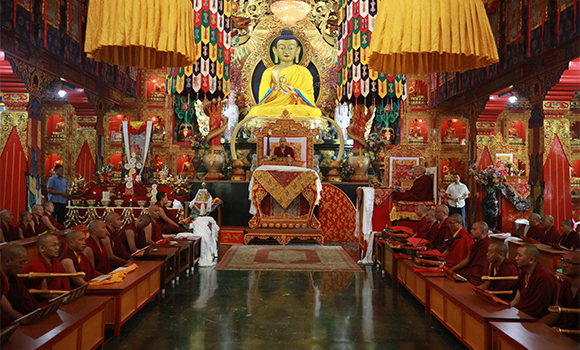 23 March 2016—Vajra Vidya Institute, Sarnath, India
From March 21, the day after the Gyalwang Karmapa arrived in Sarnath from Bodh Gaya, he began pujas in the radiant shrine hall of Vajra Vidya Institute. Also in attendance was its abbot and great scholar, Khenchen Thrangu Rinpoche. Two hundred monks and nuns participated and among their ranks were the vajra, chant, and discipline masters from the Karmapa’s Rumtek Monastery, Thrangu Rinpoche’s Tashi Choling monastery and Tara Abbey nunnery.

In the main temple, two special shrines had been arranged for the Guru Yoga of Karma Pakshi, which took place in the morning, and the practice of the Five Tseringma in the afternoon. These are the same pujas that the Karmapa led in Bodh Gaya during the annual nuns’ gathering. The essence of the Karma Pakshi practice came to Yongey Mingyur Dorje (1628/1641–1708) in a vision of Karma Pakshi and his retinue. The Five Tseringma sisters are protectors of the Kagyu lineage and also holders of Milarepa’s Dharma teachings. The pujas continued for three days, finishing today on the auspicious full moon of the second Tibetan month.
On the early morning of March 24, the practice of a fire puja known as Billowing Clouds of Nectar by Jamgon Kongtrul Rinpoche will take place. It will be followed by a long life practice for Thrangu Rinpoche known as the Three Roots Combined, which the Karmapa has called exceptionally profound. The short lineage, he said, can be traced back to a text based on the pure visions of the Third Karmapa Rangjung Dorje (1284–1339). The Eighth Karmapa Mikyo Dorje (1507–1554) also practiced the Three Roots Combined and stated that through it, “especially pure visions and dreams appeared in my experiential awareness.” The Karmapa has mentioned that he, too, feels a special connection with this practice, so it is most appropriate to offer it for the long life of Thrangu Rinpoche, one of his main teachers.