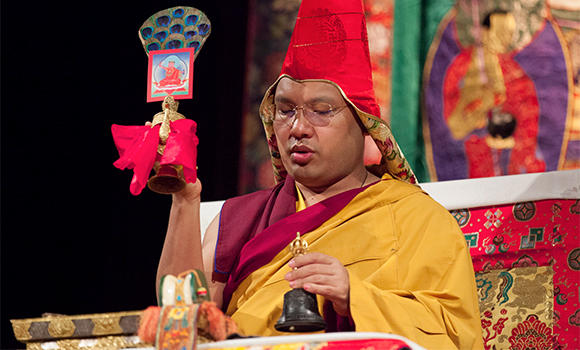 (April 19, 2015 – Kingston, New York) In the Ulster Performing Arts Center, an appliqué thangka of the Buddha, flanked by his two main disciples, descended from the ceiling of the stage to its floor, filling the space with a vibrant cascade of rich color. This special image was last displayed publicly decades ago, when it was unfurled by Khenpo Karthar Rinpoche on the exterior of the old building of Karma Triyana Dharmachakra (KTD), which was sponsoring this evening’s event. Immediately below the resplendent Buddha was the Karmapa’s throne and on his right, the two tiers of an altar held the traditional offerings and crystal for the ritual purification. As the Karmapa sat on the throne, his golden and maroon robes blended seamlessly with the hues of the thangka so that he became a part of it, bringing the image to life.

After a mandala offering, the Karmapa spoke to the audience about the lineage of the Karmapas. He noted that usually Karma Pakshi is identified as the 2nd Karmapa but in a strict historical sense, he is the first to bear the name Karmapa. This is because Dusum Khyenpa, who is usually seen as the 1st Karmapa, was not known as Karmapa, although this was his secret name. Various other Karmapa reincarnations similarly bore as their public name the secret name of their predecessor, His Holiness stated. It was with Karma Pakshi that the name Karmapa became well-known, and he even referred to himself as “the one renowned as the Karmapa.”

The Karmapas are also famous as the first lineage of reincarnate lamas or tulkus, and His Holiness explained how this tradition began. The first Karmapa, Dusum Khyenpa, had planned to institute a lineage descending through his nephew but the latter was killed, so Dusum Khyenpa decided upon a succession of tulkus instead. The Master Orgyenpa encouraged him in this and was given the responsibility of finding and instructing the next reincarnation. His Holiness related that when a very young boy announced to Orgyenpa that he was the Karmapa, Orgyenpa tested him and found this to be true, so the child was enthroned as the 3rd Karmapa, Rangjung Dorje. This recognition of tulkus, which began as an aspect of the activity of Karma Pakshi, became a unique trait of Tibetan Buddhism.

Another special aspect of Karma Pakshi’s activity, His Holiness explained, mirrored that of Guru Rinpoche, who tamed the spirits and local deities of Tibet so that the Dharma could flourish there. In a similar way, Karma Pakshi subdued the emperor Kublai Khan, who tried to kill him in eighteen different ways, none of which succeeded. In his autobiography, Karma Pakshi wrote that these brought him close to death and the most difficult to overcome was being immersed in fire. By demonstrating this inconceivable resilience, the Karmapa was able to subdue the pride of Kublai Khan who became his disciple and opened the door for the Kagyu Dharma in China. His Holiness added that although he had not yet researched this himself, some say Karma Pakshi met a contemporary, Marco Polo, who recorded that at the court of the Chinese emperor, he had met a Tibetan lama who performed great miracles.

After this brief biography, His Holiness turned to the empowerment itself, which is based on the sadhana practice discovered in 1862 by the treasure finder Yongey Mingyur Dorje. “In essence,” the Karmapa said, “this guru sadhana concerns a mandala which in nature is the fivefold mandala of Jinasagara, a form of Avalokiteshvara. In form it is a mandala containing all of the three roots (guru, yidam deity, and dakini). The principal of the mandala is Karma Pakshi himself.”

He continued to explain that Karma Pakshi once said that one could think there is a lineage between himself and Jinasagara, or that there is no lineage linking them―a way of indicating that he himself was the yidam deity. Therefore, instead of the usual placement of the yidam deity in the center of the mandala, we find Karma Pakshi in that central place.

His Holiness added that another aspect of Karma Pakshi’s connection to Jinasagara is that this yidam deity was his and the 1st Karmapa’s main practice, which they maintained throughout their lives. This evening His Holiness counseled the many people present who engage in Karma Pakshi practice to bring their experience into the context of the empowerment, in order to enrich it.

After transmitting the blessings of Karma Pakshi’s body, speech, mind and qualities, the Karmapa took time to thank the people who had made his visit to the United States possible. “This is the first time in my life that I’ve been able to travel for two months at a time. This opportunity has arisen through the generous support and kindness of many friends, both in the Indian Government, which has been extremely supportive, and also in the Central Tibetan Administration. This opportunity to be here has not come easily. It has come through the hard work of many people, and therefore, I want to publicly express my heartfelt gratitude to everyone who had a role in making this possible.”

The Karmapa related that even though it has been fifteen years since he left Tibet, people still ask him what his reasons were for doing so. There are several reasons, he said, but the main one is that India is a free and democratic nation and he wished to have the freedom to travel internationally. The first place that he was able to visit abroad was the United States, and this was made possible through the blessing of the 16th Karmapa, Rigpe Dorje, and the sustained commitment of his American disciples.

The Karmapa concluded the evening by talking about his very full schedule. When he first came in 2008, his schedule was tight and he thought that on subsequent visits, he would have time to relax. This did not happen in 2011, but he thought that for sure with two whole months that he would have a less packed program this time. But that was not to be the case as the schedule is as tight as ever. So two months was really not enough time and he hoped that in the future he would be able to spend more time in the United States. A loud and sustained applause confirmed that he was not alone in this. Finally, the Karmapa wished each and every one a long, happy life and all success. Filled with these blessings, a crowd of radiant faces moved reluctantly toward the exits and the bright evening outside.