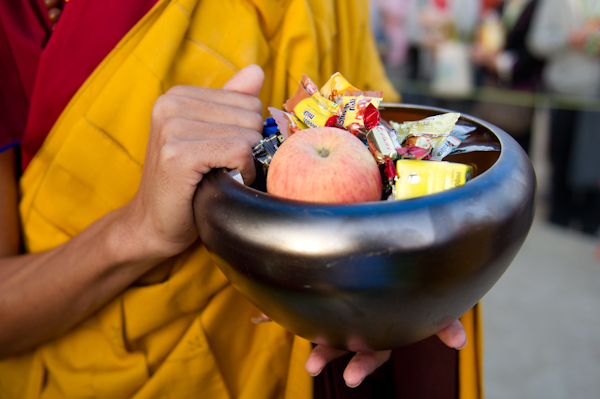 This year, for the first time, the ceremony was not held at the Mahabodhi stupa but transferred to Tergar Monastery and the Monlam Pavilion. It was also brought forward to six o’clock in the morning. The procession replicates the alms round from the time of Lord Buddha, a tradition which survives still today in some countries.  Buddhist monks and nuns set out each morning with their bowls to collect whatever food is given them by the villagers or townspeople.

By 5.15am the first laypeople had already begun lining up along the route, guided by Kagyu Monlam volunteers, easily recognized by their emerald green volunteer vests. The alms round is conducted in silence so people were encouraged to chant the refuge prayer.  After Mahayana sojong at the Monlam Pavilion, the monks and nuns gathered in the shrine room at Tergar Monastery and the round could begin.  A monk bearing incense headed the procession. He was followed by H.E. Gyaltsap Rinpoche, Khenpo Dönyö and Ringu Tulku bearing metal staffs topped with rings that jingled: traditionally the noise warns animals away. Behind them came thegelong in order of seniority, and finally the gelongma.

The procession wound its way round Tergar Monastery, out through the gates, along the road and into the Monlam Pavilion, where the monks and nuns resumed their seat and continued the morning session’s Twenty Branch Monlam prayers. The Gyalwang Karmapa did not take part, but watched from the terraced roof of his quarters.