Gutor Day One: Protector Practices to Prepare for the Blossoming of the New Year

For over three hundred years, from the time of the Fourth to Tenth Karmapa, the Karmapas traveled extensively in what was known as the Great Encampment. This allowed them to reach disciples all over Tibet with great flexibility and spontaneity. From the time of the Seventh Karmapa (1454-1506), the Kagyu Monlam Chenmo as well took place wherever the Karmapa happened to be on the date for the event. Following in this tradition, the Monlam Pavilion in Bodh Gaya is a flexible, open space that transforms into whatever is needed at the time.

Its latest reincarnation is as a protector shrine or gönkhang, which can be found at most Tibetan Buddhist monasteries, though they are often off limits to the uninitiated. The Pavilion has been magnificently arranged for the rituals of Gutor—six days of extensive Mahakala practices performed at the end of the Tibetan year. Their purpose is to make vast offering to the protectors and to clear away obstacles for the teachings and all living beings in the year to come.

A team guided by the Karmapa has been working long hours to transform the Pavilion. Over night the background of the white and gold wall behind the main Buddha has shifted to a dark black sky filled with golden flames of wisdom, curling into the night’s space. These dynamic images are repeated in the brocade for a new set of thangka paintings, made in Dharamsala, depicting the protectors of the ten directions. They have been hung behind the Buddha, above the entrance gate and in two pairs at either end of the rows of paintings lining the central aisle. Black brocade with spirited red and gold flames forms four long pendants hanging from the lower end of these images. This unusual touch gives the impression that the fires are rising from below and encompassing the central figures traced in gold on black.

In the middle of these two sets of four are other paintings. Six in black and gold on either side were created in Nepal and represent some of the protector practices performed during the pujas, such as Tseringma, Shingkyong, Namthöse, Singön, and Dorje Lekpa. The remaining three in full color on either side are yidams important to the Kagyu lineage, including Vajra Varahi, Chakrasamvara, Gyalwa Gyatso, Hevajra, and Mahamaya. These paintings were also displayed during the Kagyu Monlam. Also new this year and recalling the gönkhang of old Tibet is a frieze of animal pelts set next to each other in lively, natural colors. Running above all the images on both sides, the figures are so vigorous and powerful in their dynamic flow that they still seem alive.

Moving down this central aisle to look again at the stage, we can see things familiar from previous years and also splendid additions. Below the central Buddha is a statue of the First Karmapa, Dusum Khyenpa, sitting on a brocade throne. In front of him is small shrine with an upswept roof, which shelters an ornately carved silver pavilion holding a powerful statue of Bernakchen, the main deity for the Gutor practices. In front of him is the Karmapa’s black and gold throne. To the Karmapa’s right is a golden folding screen with white cranes, forming the background for an impressive black and gold set of ancient armor. Below on either side are new sets of weaponry, including fierce blades of all shapes plus a bow with an elegant quiver of arrows.

Just behind the folding screen rises a three-meter tall statue of Bernakchen, his face veiled by khatas of five colors so that only his flaming hair is visible. Also covered in silks are Mahakali riding her blue mule to Bernakchen’s right and to his left is Dorje Lekpa. These three statues were newly created by Gyaltsap Rinpoche as he consulted texts and his experience while working closely with a sculptor.

To the right of the Karmapa is a special altar for the Gutor torma (sculpted offerings). They are over a meter tall and made in the Karmapa’s encampment style, which means that the shading of the flower ornaments is subtle and the colors are not bright but pastels. A new touch for the tormas this year are small pieces of gold leaf placed randomly on the petals to catch the light of the sun. The main torma in the center of the top layer is called nyingzuk (literally, “form of the heart/mind”), which represents the central deity, Bernakchen. Just like a statue, the torma is filled with mantra and precious substances. On either side of this main torma are two smaller ones: the kangwa or fulfillment torma for repairing broken samaya and replenishing any deficits, and the solkha or supplication torma for making requests. Many smaller tormas fill the layers of this impressive altar.

To the right of the torma altar is the elaborate thread palace for Bernakchen, which shelters an awe-inspiring torma likeness of his head, known as the Mouth Opened-Wide with Ha (Ha zhal). It belongs to the general category of a torma offered to the fire (rgyag gtor). The torma is surmounted by two tiers of intricately interwoven thread-crosses in the shape of umbrellas, which are known as the palace of Bernakchen. Underneath everything are one visualizes mandalas of the elements.

As noted earlier, the purpose of the Gutor practice is to benefit living beings and the teachings, so Bernakchen consumes all that is negative, all adverse conditions, all who make obstacles for the Dharma or for those practicing a true path. Everything that is adverse is eliminated. The Hazhal torma will be offered to a bonfire on the last day of the practice.

The first practice of this year’s Gutor began in the afternoon of February 21 with the Grand Seating Ceremony. The head monk gave a long speech (by memory) in a very formal style accenting every two or three syllables with his powerful voice and turning slowly to the right and left. He spoke of the purpose of these next days of practice, which are for peace in the world, for the spreading and preservation of the teachings, and for developing our bodhichitta. He then read out the names of each monk and nun participating in the Gutor practice and they filed in through the opening between the two great drums in their new gold and black pavilions.

When everyone was seated, the nine disciplinarians left to escort the Karmapa into the shrine hall. He entered in a formal procession of jalings and incense bearers, and after three deep bows, took his place in the very center of the stage, wearing his Black Hat and a beautiful brocade cape (dagam). Thus began the Gutor rituals with short practice of Mahakala in a spectacular setting, worthy of the highest aspirations.

[With thanks to Khenpo Garwang for his teachings]

Protectors of the genuine Dharma can be found in the sutras; for example, in the Samadhiraja Sutra (the King of Samadhis Sutra), taught at Rajgriha on the Mountain Resembling a Flock of Vultures. At that time, the Buddha asked, “Who will protect this sutra so that its lineage remains?” On the human level, Chandraprabhava (a previous incarnation of Gampopa) said he would do so. On the non-human level, numerous deities who were present also vowed to protect it. Speaking in general about protectors, the Kadampa Geshe Sharawa (Yönten Drak, 1070-1141) said that those who protect the teachings are the dharmapalas and the sangha. We do not need to supplicate them as this is their responsibility, and in turn, it is our responsibility to offer them tormas or gifts that sustain them.

In a few places, the sutras also mention making offerings to protectors, and with the vajrayana these practices became extensive including numerous Dharma protectors and many kinds of tormas. Such rituals composed long ago by Nagarjuna were found in China; however these practices, which originated in India, spread much more extensively in Tibet, so we find numerous, fierce black deities, such as the Black-Cloaked One (Bernakchen, the Two-Armed Mahakala), the Four-Armed Mahakala, and many others. Their lineages of practice remain alive to this present day. Through Marpa the Translator came the lineage that is practiced in the Karma Kamtsang tradition, which preserves special key instructions, known as the Practice of the Body and Mind Inseparable from the Protector.

Originally the practice of Bernakchen was so secret that only a few close disciples knew that it even existed. Drogön Rechen, a disciple of the First Karmapa, taught it to a few; then the Second Karmapa taught it to a greater number of disciples; the Second Shamar, Khachö Wangpo, (1358-1405) spread it more widely, and finally the Sixth Karmapa, Thongwa Donden (1416-1453), made it extensively available. The first statue of Bernakchen was created by the Seventh Karmapa. From his time, this tradition of practice has expanded and continued to the present day.

If we turn to the history of the ritual itself, the first one was composed by the Second Shamar, and then the Sixth Karmapa expanded the practice, making it so long that it was known as the Boring Mahakala, though its actual name is Burning Up Hostility (sDang ba rnam sreg). (This practice was revived by the Karmapa in 2012 and another new edition was printed for this year’s Gutor.) The Eighth Karmapa (1507-1554) asked the Fifth Shamar, Könchok Yenlak (1526-1583), to condense the text, so he created a shorter practice, called the Abridged Burning Up Hostility (sDang ba rnam sreg las btus pa), which is known these days as the Ritual of Mending and Supplication (bsKang gsol), practiced widely in Kagyu monasteries and centers. This text is also called the Golden One because the first words to be chanted of the parts from Burning Up Hostility were marked in gold.

Finally there is a short version of Burning Up Hostility, known as the Tsalma (mTshal ma), which means the Cinnabar Text, since in this case the first parts to be chanted that were selected from the longer text are marked in vivid red. All three lengths of the ritual will be chanted during Gutor this year: the first and last days are for the short practice; the second and third day, for the long version; and the fourth and fifth days for the middle length text. On the fourth day the practice will begin at 2 am in the morning.

To give the complete picture, there is still another version of the Mahakala practice, written by the Fifteenth Karmapa, who felt that it was inauspicious to have such a short practice, so he composed one that was even more extensive than the text of Burning Up Hostility by the Sixth Karmapa. 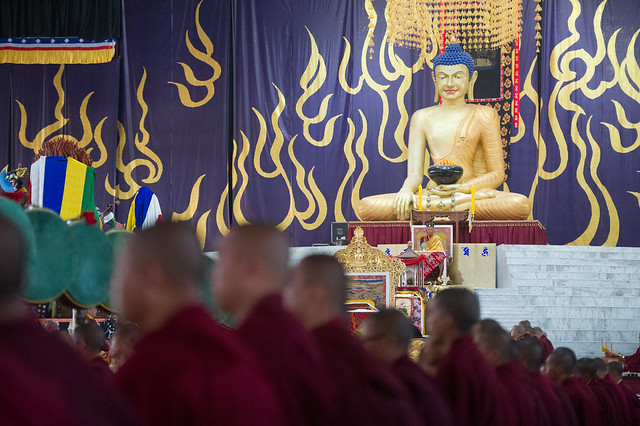