The Year of the Female Fire Bird Takes Flight 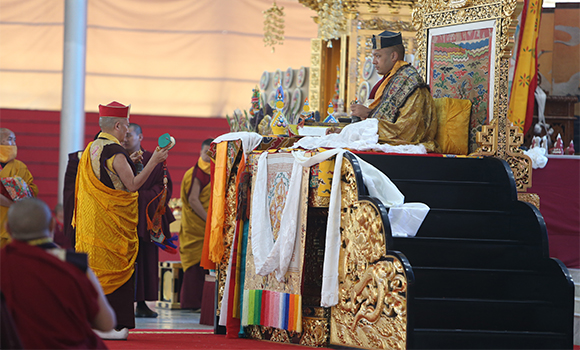 For the Gyalwang Karmapa, the Tibetan New Year began in the first hours of the day, as he met in the Tergar Monastery shrine hall with tulkus, khenpos, and masters from various monasteries and received their khatas. In return he gave them his blessing and a traditional bright red cord. The monks recited prayers for peace in the world and the flourishing of the teachings as well as the very long life of the Karmapa. Afterward the entire monastic and lay Sangha gathered at 4:30 am in the Monlam Pavilion for a special long-life practice based on the Three Roots Combined, called A Life-Force Indestructible like a Vajra. The practice was led by the Karmapa’s heart son, Gyaltsap Rinpoche, who had bestowed this empowerment the previous day.

In February of 2016 the Karmapa had also given this empowerment, and at the time commented on its importance for his Kamtsang Kagyu lineage. The short lineage is traced back to a text based on the pure visions of the Third Karmapa Rangjung Dorje (1284–1339). The Eighth Karmapa Mikyo Dorje (1507–1554) also practiced the Three Roots Combined and stated that through it, “especially pure visions and dreams appeared in my experiential awareness.” Mikyo Dorje expanded the practice, and the Ninth Karmapa Wangchuk Dorje (1556–1603) created an extensive sadhana by supplementing Kamtsang practices with those from the Nyingma tradition.

Later the treasure revealer Chöje Lingpa (1682–1725) discovered a terma of the Three Roots Combined, which resembled that of the Kamtsang tradition. It was this newer tradition that the Kamtsang masters came to use, so the original version almost disappeared. To revive the tradition, Jamgon Kongtrul Lodro Thaye (1813–1899) included the Kamtsang lineages of the empowerment and reading transmission in his Treasury of Precious Terma. The Karmapa said that he had received these empowerments from Gyaltsap Rinpoche, and among the hundreds of initiations, it was this one of the Three Roots Combined that gave him a special feeling. The Karmapa added, “Since the Three Roots Combined constitutes  an exceptional and profound text of the Karmapa’s tradition, I’ve taken a particular interest in it and made efforts to find the old texts.” Through his research, the Karmapa has found almost all of the texts.

The Karmapa also summarized an explanation of the Three Roots Combined: the aspect of the lama is Tsepakme; the aspect of the yidam is the great compassionate one, Chenrezik; and the aspect of the Dharma protector is the wisdom protector Mahakala. In this way, all the three roots are complete in one form. Mikyo Dorje stated, therefore, that even if you have not received other empowerments, with this single one you would be able to care for and guide students. The Karmapa added that Mikyo Dorje gave this long-life practice another name, “Not a Lie” because it arose from a pure vision. [More about the Empowerment and Practice of the Three Roots Combined].

Today’s puja began with Gyaltsap Rinpoche leading the practice in the Monlam Pavilion. After having visualized and made offerings to the yidam deity, he left to escort His Holiness into the Pavilion, accompanied by music resembling that played for inviting a yidam deity to be present. After the Karmapa took his seat on the throne, a very long and wide, white silk scarf was offered and remained in a half circle around him. Gyaltsap Rinpoche then connected five subtly colored scarves to the Karmapa by tucking the ends underneath the cloth on which the Karmapa sat while the other ends extended in a long, gentle curve to a semi-circle of five tables draped in cloth of the same color and holding a torma of a similar hue. Behind each of the five tables stood a dakini dancer, related to the family of that particular color.

Gyaltsap Rinpoche remained standing to make the extensive offerings, first to the dakinis of the five directions. With each one, the dakini dancer carried her torma down the central aisle to be offered outside. The text relates that she is surrounded by a 100,000 of her kind, expanding the dimension of the offering into vast space. After praises and offerings to each dakini, their scarf is imagined to dissolve into space and requests are made for them to perform various activities, such as extending the lama’s life, assisting in his activities, and bringing well-being and peace to the world.

At the end of the ceremony, Gyaltsap Rinpoche offered the Karmapa amrita from the kapala and then the long-life vase, and finally a round column of long life pills. All of them have been blessed by Gyaltsap Rinpoche, the practice, and the combined aspirations of everyone present. After the dakinis, extensive offerings were made to the Karmapa, including the eight auspicious substances, the eight auspicious symbols, and the seven articles of royalty. Their purpose is to extend his life and facilitate his beneficial activities throughout the world.

The mandala of giving thanks was followed by a long line of offerings from the Kagyu Monlam Committee. Tashi prayers followed to spread the goodness and benefits of the practice to all parts of the universe: “May all be auspicious through the body, speech, and mind of the Victorious Ones.” Holding fragrant incense, Gyaltsap Rinpoche escorted the Karmapa off the stage for a short break before the public audience.

While the stage was being reorganized, tea servers spread throughout the audience and the head monk read out thanks to the sponsors. Over the loudspeakers, it was announced that the Karmapa would bless each and everyone who had come and that they all would have a chance to offer him a khata. The Karmapa returned to his throne and received the second long line of offerings from, among others, the Tsurphu Labrang, Gyaltsap and Bokar Rinpoches’ Labrangs, as well as the Karmapa Khyenno Foundation.

Afterward, the first of the 6,000 people from the lay Sangha, followed by the ordained Sangha, offered their khatas and passed in front of the Karmapa, who blessed the top of their head with an elegant silk tassel at the end of a rod while the gyalings played in the background. As a young incarnation at Tsurphu, the Karmapa also blessed people in a similar way as his throne was very tall and it would have been difficult to reach each person. Today it was a way to allow all the participants to come close to him. After some two and a half hours, everyone had received the Karmapa’s blessing, a wonderful way to usher in the New Year. 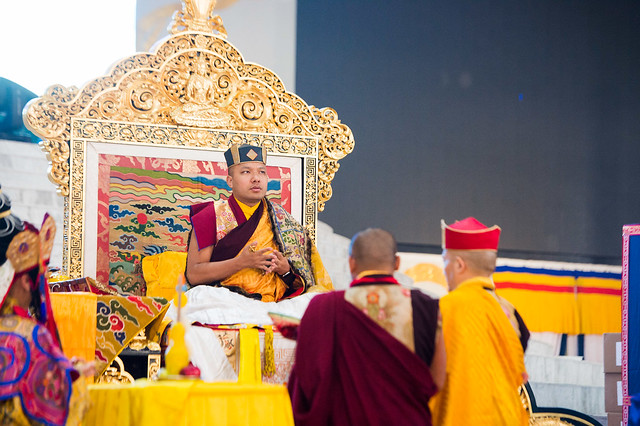