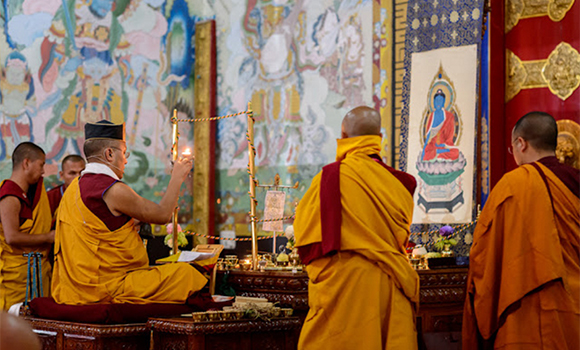 21 February, 2016 -Tergar Monastery
On the evening of day six of the Monlam, the entrance to Tergar Monastery was transformed by a spectacular ritual of prayer and fire performed by the Gyalwang Karmapa and the Akshobhya retreat participants. The ritual was the concluding activity of an intensive two-month Akshobhya retreat, which began on December 24, 2015. A significant part of the ritual included the burning of names of the deceased and the living, as a means of prayer and purification. Over the past week, thousands of people made offerings and wrote names down on behalf of their friends and relatives.

In anticipation of the ritual, prayers to Akshobhya Buddha took place both at Tergar and in the Pavilion during the afternoon. In the Akshobhya Shrine Room, located on the top floor of Tergar, the retreatants gathered for a final time to perform two hours of preliminary prayers. Meanwhile, in the Pavilion, everyone joined together in chanting the dharani sutras of Akshobhya Buddha, which purify karmic obscurations and liberate beings from suffering.

On the veranda of the Tergar Shrine Room, preparations were also going on. A large square table filled with offerings was set up facing a thangkha of the blue Askhobhya Buddha. The table represented Akshobhya’s pure land, with its boundary around the edge symbolically delineated with a metal gate and colored string. A large metal bowl was placed in the center of the table for a small fire, which would be lit by the Karmapa. In front of this table was a beautifully carved high seat for the Karmapa, placed so that he could easily reach into the pure land during the ritual. To the right of his seat, a table with offerings for the fire was arranged, including the five grains, pomegranate, white and black sesame seeds, small balls of tsampa for long-life, grasses, and so forth. A second table held the eight auspicious symbols and the five auspicious substances.

Outside, a pacifying mandala had been placed within the hearth and firewood carefully stacked up around it. Boxes of the names of the living and the dead waited on the shrine steps to be burned, and the area was cordoned off to keep the crowd at a safe distance.

By mid-afternoon, hundreds of people had already started to gather and take their seats on the brick walkway and lawn in front of Tergar. Speakers were set up to project the chanting from the pavilion and the crowd was asked to maintain complete silence and not take any photographs during the ritual.

At 5pm, the retreatants arrived on the veranda, carrying their prayer books and puja tables. This year 36 people, including both monastic and lay practitioners from around the world, participated in the retreat. The monastics, wearing their yellow chögu robes and white khatas around their necks, took their seats facing the altar. The lay practitioners, wearing white shawls, sat on the right and left side.

Shortly thereafter, as dusk was approaching, the Gyalwang Karmapa emerged from the front doors of the shrine. He placed a white kata around his neck, made three prostrations, and took his seat facing Akshobhya. Around him, the four Dharma Kings painted on the walls of the veranda faced him as well, providing their regal protection..

During the three hours of the ritual, only the Karmapa’s voice was broadcast over the speakers. This provided a rare opportunity to hear His Holiness chanting prayers for an entire ritual, since normally we hear the chant master’s voice. The voices of the other retreatants—and the fire—could be heard in the background. Some of the most poignant moments in the ceremony were silent. Specifically, at several points the Karmapa turned off his microphone and sat in meditation posture, and a wave of stillness swept over the crowd.

The ritual itself was quite elaborate, with many different mudras, gestures, and actions performed with grace and precision by the Karmapa. About halfway through the ritual, while reciting the Mahamudra Lineage Prayer, the Karmapa put on his black activity hat. Shortly thereafter, he lit the fire in the center of Akshobhya’s pure land. Immediately afterwards, monks lit the fire outside. As the Karmapa made offerings to the fire in front of him, the fire in the courtyard became a blazing inferno, reaching over 10 feet in the air. For nearly half an hour, monks threw the papers with the names of living and deceased into the flames. At times, sparks, flames and burning papers reached as high as the Tergar shrine building, causing the crowd to point and marvel. The scene was breathtaking, set against the dark of night, with the celebratory fairy lights currently hanging from Tergar roof, and at the center the Karmapa.

Near the end of the ritual, Karmapa chanted a prayer to Amitabha, and everyone outside joined in. As the fire started to die down, the large torma was placed in it as the final offering. By 8:30pm, the prayers were complete. The Karmapa sat for several moments with his hands in prayer, then stood up and walked through the doors into the shrine room. Immediately, some spectators crowded onto the veranda where he had been sitting, while others made circumambulations around the fire outside, reveling in the blessing of what they had just witnessed.