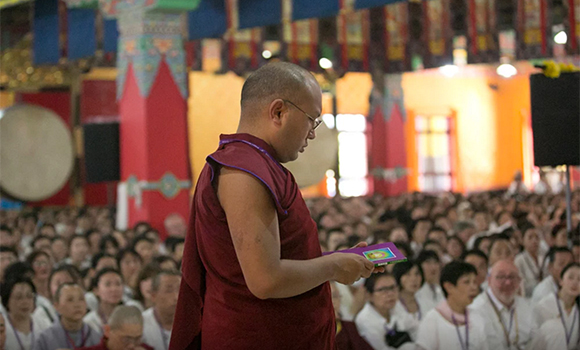 21 February, 2016 -Tergar Monastery Shrine Room
The Gyalwang Karmapa met with the members of the Kagyu Monlam today, shared his appreciation for their support, and offered a short teaching and gift.

The members began gathering on Tergar lawn shortly after lunch. Close to 1,400 people became members of the Monlam this year, so the lawn was filled with people eager for their audience with the Karmapa. Once inside the shrine room, everyone sat close together, waiting quietly for the Karmapa to arrive, meditating or reciting mantras. Some closed their eyes—a moment of quiet and rest after many days of prayers and activity.

At 3pm the Karmapa arrived. After taking his seat, he gave a short address to the members, which was translated into both English and Chinese. First, he expressed his view that the Monlam and all the events this year have gone extremely well, and thanked everyone for helping to support this activity. He also thanked everyone for bearing the hot weather this year, and any other challenges and difficulties of coming to the Monlam.

Next, the Karmapa explained there is an outer and an inner way to be a member of Monlam, and that the best way is to be both. Being an outer member means supporting the external needs and physical requirements of the Monlam. Among the three types of generosities, this is the offering of material things. To become an inner Kagyu Monlam member, “one needs to bring about positive change in one’s life,” the Karmapa said. In particular, the Karmapa said that being an inner Monlam member means asking yourself how you can be of service to the Buddhadharma and to sentient beings. He asked all those present to commit at least part of their lives to this service.

“The reason for saying this is that, being human beings, we often get carried away by selfish purposes,” the Karmapa said. As an example, the Karmapa said that someone could become a Monlam member just to get a better seat in the Pavilion, closer to the lama. “Looking for a selfish opportunity is not compatible with the two ways someone can be a Kagyu Monlam member,” he said.

Concluding, the Karmapa said that in Tibetan culture this first month of the year is considered especially auspicious, and that during this time he is making sincere prayers for everyone’s wellbeing. “May all of you be free from illnesses, and may all your wholesome and good wishes become fulfilled spontaneously,” he said.

Even though time was short and he needed to prepare for the Akshobhya Fire Puja starting at 5pm., the Karmapa made time to bless each member individually. With joy and energy in their step, they all filed past him to make their offerings and receive his blessing. The Karmapa handed each member a gift as they passed—a clear wrist mala with one red bead. After receiving their gift, the members filed out the door, until finally only the Karmapa and his attendants remained in the shrine, ready to prepare for the fire puja.