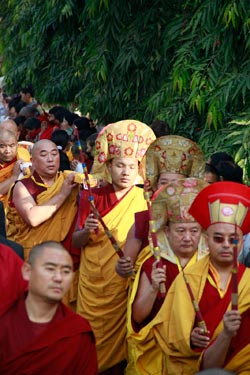 His Holiness arrived before dawn, sat beneath the bodhi tree and bestowed the sojong vows, reminding us of our motivation, to take the vows for the benefit of beings.

After the Sanskrit prayers, the umze with his voice resonating over the intercom, never missing a beat, went into the Ritual offering to the Medicine Buddha and the Seven Tathagatas, which is now conveniently available in a supplementary book which accompanies the Monlam prayer book.

At 8 am all the gelong and gelongma, who were to participate in carrying volumes of the Kangyur for the Kangyur procession, lined up near the entrance to the Shrine to receive the volume they were to carry.

We were each handed a volume, with flap facing outwards as His Holiness had specified during the rehearsal. His Holiness had stressed the importance of everyone being in unison, walking slowly, with eyes focused downwards, keeping the correct distance. There were monks on hand to assist so that everything was done according to His Holiness’s instructions.

The procession made its way down the right-hand side of the Mahabodhi Stupa and up the central steps on to the outer circuit. The Kangyur was preceded by incense bearing monks, dressed in chögu and yellow tsesha [pointed hats] and two monks playing gyaling. At the head of the procession, arranged in ascending order and wearing red ceremonial hats, came Khenpo Lodrö Dönyö Rinpoche, the abbot of Mirik, Yongey Mingyur Rinpoche, Gyaltsab Rinpoche and Jamgon Kongtrul Rinpoche, followed by His Holiness the 17th Gyalwang Karmapa, wearing his Gampopa hat.

Then came the 96 bareheaded gelong and the 7 gelongma, bearing the texts balanced on their left shoulders, supported by their left hand and steadied by their right.

During the Kangyur procession the faithful devotees lined up along the circumambulation route holding flowers and katas, excitedly waiting to see the procession. They were instructed not to touch the monks and nuns or the volumes but as their devotion is so fervent and their wish to receive blessing was so strong a few just could not resist.

There were a few instances of people trying to touch the volumes to their heads as the procession passed. Then finally one person insisted that a kata should be put on a volume of Kangyur. Even though the discipline master told him not to, he insisted and draped it around the volume, and in the end the discipline masters, some of whom were learned Khenpos, just laughed and let it be.

Finally, the procession, having completed one circumambulation, returned down the central steps and passed to the left of the Mahabodhi stupa, and all the volumes were given to the waiting monks who distributed them to the congregation in sections, just one or two sheets at a time. Thus the whole Kangyur, which contains all the teachings the Lord Buddha gave when he resided on this earth, was read within an hour or two.

SESSION TWO: CONSECRATION OF THE FRIEZE OF BUDDHA’S LIFE

Before returning to the throne for the reading of the Kangyur, His Holiness took a detour to consecrate the new sculpted stone frieze, sponsored by a Malaysian family, which runs along a section of the middle circumambulation path of the Mahabodhi Temple.

His Holiness returned to the Mahabodhi stupa after lunch in order to conduct a shorter Akshobhya Ritual, including the chanting of the Dharani that Thoroughly Purifies All Karmic Obscurations, and the Sutra of the Dharani that Thoroughly Liberates from All Suffering and Obscurations. His Holiness instructed those who did not have the ritual text to recite these two prayers or Akshobhya’s mantra, but not just for their own benefit; they should bear in mind all sentient beings. [Those attending the Monlam had received the empowerment but would need the transmission and the instructions before they could practice the full ritual which belongs to kriya tantra.]

His Holiness sat on a special wooden throne facing a same-height heavy, wooden, Japanese-style square altar, which was used for the offerings. The Akshobhya ritual has been preserved intact in the Japanese Vajrayana tradition, as authenticated by evidence in old Tibetan texts. Behind the altar, hung a thangka of Akshobhya Buddha, painted in Chinese style and mounted on fine, patterned paper. Akshobhya is dark blue in color, with a reddish outer robe. His left hand rests in the earth-touching gesture and his right is in the mudra of meditation. In his palm is a golden vajra.

After His Holiness concluded the ritual, he left to give a public audience at Tergar Monastery. Immediately, the specially erected shrine – the throne and the square altar, both extremely sold pieces of furniture– were dismantled, then carried with difficulty up the steps by several young monks.

At the top of the steps, their way was barred by the small entrance gate, which had to be moved to one side in order for them to ease the shrine through. The parts were then heaved into the back of a tractor-trailer to be taken to Tergar for the evening Akshobhya Purification Ritual and fire puja.