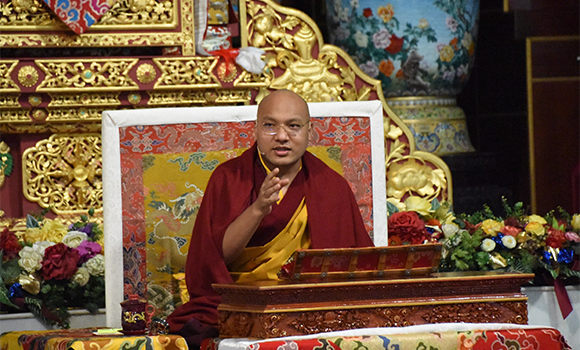 January 15, 2016 -Tergar Monastery, Bodh Gaya, Bihar India
During the second day of the Third Arya Kshema Winter Dharma Gathering, the Gyalwang Karmapa continued his teaching on Gampopa’s Ornament of Precious Liberation, describing the causes for arousing bodhichitta. He also discussed the issue of the nun’s ordination, indicating that although he had hoped to initiate the process of giving bhikshuni ordination this year, it had to be postponed for a variety of reasons.

The teaching today was focused on the four causes of arousing bodhichitta presented in the Levels of the Bodhisattva by Asanga. The first cause of arousing bodhichitta is seeing or hearing of the powers of the buddhas and bodhisattvas. The Karmapa explained that for this reason, studying the life stories of buddhas and bodhisattvas of the past is important.

As an example, His Holiness told the story of Akshobhya Buddha. Before Akshobhya became a buddha, he made the aspiration that until enlightenment he would never be angry or perturbed by any sentient being. The Karmapa said that we need to consider deeply our own aspirations. To make an aspiration like Akshobhya’s to not become angry until Buddhahood is difficult to conceive for us ordinary beings. Therefore the Karmapa suggested we begin by making an aspiration to not become angry for a single day. Then gradually over time we can begin to develop the courage of Akshobhya.

The Karmapa also addressed the question of why it is necessary to become a perfectly enlightened buddha to benefit others. His Holiness quoted from Atisha’s Lamp for the Stages of the Bodhisattva Path, which says that to benefit other beings we must develop clairvoyance to know all aspects of their situation in order to really benefit them. Because bodhisattvas are not completely omniscient, when they work to benefit beings most, but not all, of what they do is successful. In contrast, everything that buddhas do to benefit beings is meaningful. Furthermore, the activity of buddhas is accomplished effortlessly and spontaneously.

The Karmapa emphasized that our aspiration to attain Buddhahood should not just be words—we need to look at the actual situation and understand the real benefit of achieving Buddhahood. If we develop this deep wish and remember it at all times, then achieving enlightenment will be possible.

Upon concluding his discussion of the text, the Karmapa set aside time to explain the latest developments in his plans to introduce full ordination for women in his lineage. His Holiness said there have been many rounds of discussion focused on whether or not it would be possible to confer bhikshuni ordination and what methods to use in doing so. The Karmapa said that it has now been determined that it is indeed possible, citing discussions at a 2015 conference in Dharamsala. He explained that in principle, agreement had been reached among senior heads of all Tibetan Buddhist lineages that it would be acceptable to hold bhikshuni ordinations conferred by a dual sangha consisting of monks from the Mulasarvastivada tradition practiced in Tibetan Buddhism and nuns from the Dharmagupta vinaya tradition.

The Karmapa noted that because the conferral of bhikshuni ordination to nuns in the Tibetan tradition is a significant step, it is important that it be done properly and carefully. Among the reasons for deferring the initial step is the fact that the upcoming year is considered by Tibetan society to be astrologically inauspicious. Now that it is clear that bhikshuni ordination will take place, His Holiness explained he would hold conferences this year to discuss how to proceed in practical terms.