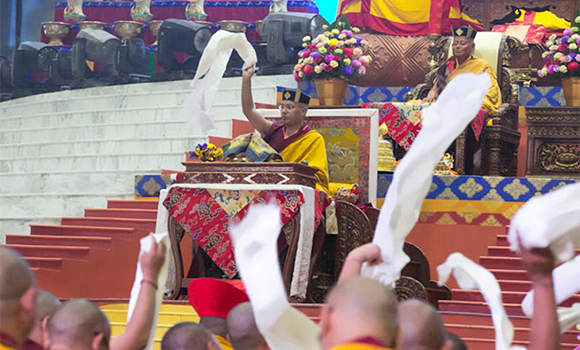 During his special address in the final session of the day, the Karmapa began by sharing the statistics of this year’s Monlam. Attendees included 4,600 members of the sangha and 6,100 lay people, representing 55 different countries. Of these, 1,600 served as volunteers. The Karmapa pointed out there were monastics from all four major lineages of Tibetan Buddhism, including 320 Nyingma, 33 Sakya, 26 Gelugpa, and 4 Rime (non-sectarian) practitioners.

“We call this the Kagyu Monlam, but during the Monlam we primarily recite the teachings of the Buddha and Indian masters, and the Tibetan masters from all traditions,” the Karmapa said. “This helps us create pure vision of all the lineages, and to help all the lineages flourish.”

And of different races,

The 17th Karmapa advised, “We should recognize the spontaneous manifestation of the Monlam each year as the result of their blessing, and rejoice in their lives and examples.”

Next, the Karmapa offered his thanks to his heart sons HE Jamgon Rinpoche and HE Gyaltsab Rinpoche and , and the 46 Tulkus, Rinpoches and masters who attended this year. He also thanked the 50 khenpos from various monasteries and nunneries, the sangha, and all those who have came from all across the world. Mentioning the sometimes difficult conditions and particularly the heat that everyone needed to endure this year, the Karmapa said, “You have not let it slow you down. You have been motivated by faith and devotion and I rejoice in your coming.”

The Karmapa also thanked all the 1,600 volunteers and especially Lama Karma Choedrak, CEO of Kagyu Monlam, for their dedication and hard work. “This is all the work of upholding the teachings,” he said.

Next, the Karmapa made a few announcements. First, he discussed the earthquakes in Nepal last year, and the need for the various monasteries and nunneries there to work together to raise funds for reconstruction and repairs. He asked that representatives of each group meet the following morning to discuss their various situations and come up with some ideas to share with him.

The next announcement was regarding the curriculum for nuns’ study and debate training. The Karmapa said he would be meeting with the khenpos from all the nunneries during upcoming Kagyu Gunchö to discuss this.

The third announcement was for all the sangha who received the Three Roots Combined empowerment that His Holiness offered during the pre-Monlam activities. He asked that everyone recite the Three Roots Combined mantra as much as possible between now and next year. Best would be 400,000 recitations, and a minimum of 100,000. The Karmapa said that those who complete the approach would be gathered to perform a long life offering for His Holiness the Dalai Lama, hopefully next year.

Next, the Karmapa turned the microphone over to the Khenpo Kelsang Nyima, who announced the winners of this year’s examination of monastic forms competition. He praised the performance of all the sangha, and said that there had been “astounding improvement” since last year’s competition. Since the Karmapa reformed the codes of conduct in 2004, based on the forms described by the Buddha in the Vinaya, “The conduct of the sangha at the Kagyu Monlam… has become something that instills faith in people across the world,” the Khenpo said.

Prizes were awarded for first, second and third place in two categories, novice monks and nuns (getsul), and fully ordained monks (gelong). The winning monasteries and nunneries received cash prizes of ₹100,000, ₹50,000, and ₹25,000 respectively. Nunneries took all three prizes in the novice category. “It seems like in the future, when we have bhikshunis, the nuns will win everything,” Khenpo Kelsang Nyima said, with a smile.

Next, the Karmapa asked everyone to dedicate the merit of completing the Kagyu Monlam:

Please dedicate the roots of virtue of having completed it so that the teachings of Buddhism in general can flourish a long time. That the Crown Jewel, the sole hope of Tibet, the Dalai Lama may live long. That all the lamas and all the sanghas in the ten directions be harmonious and pure in the three trainings. On a larger scale, may the universe be filled with the excellent glory of peace and happiness—may we dedicate this virtue that it become the cause of this.”

Before beginning the dedications, the Karmapa also asked everyone to keep three auspicious blessings in mind. The first was that Mingyur Rinpoche had returned from his four-year retreat, and had become one of the leaders of the Kagyu Monlam. The second was that the reincarnation of Bokar Rinpoche had been able to attend the Monlam this year. Third, the Karmapa announced that during the Tseringma puja conducted at the Arya Kshema Winter Dharma Gathering, he felt great devotion for Tenga Rinpoche and had a “thought or minor vision of where he might be.” He said he would keep these details until he was able to share them with HE Sangye Nyenpa Rinpoche, but that he hoped Tenga Rinpoche would be able to return soon.

The final dedication prayers began, and with each aspiration thousands of people waved their khatas, filling the Pavilion with a sense of joy and festivity. The long horns and giant conches joined the gyalings for the final crescendo as our aspirations resounded throughout the universe.