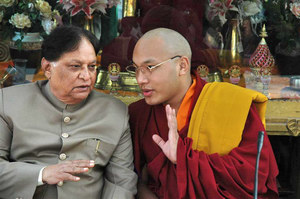 His Holiness, at the celebration of the 2550th Anniversary of the Lord Buddha’s Parinirvana, speaks to the Governor of Bihar, His Excellency R. S. Gawai

On December 29, 2006, His Holiness attended an interfaith ceremony at Maha Bodhi Temple to represent the Buddhist religion on the occasion of the 2550th anniversary of the year of Lord Buddha’s Mahaparinirvana. The occasion was celebrated by an interfaith prayer for world peace. His Holiness was invited to attend by the Maha Bodhi Temple Society who organized the prayer. The Governor of Bihar, His Excellency R.S.Gawai, was also present. – Tashi Paljor