On April 8, 2006, His Holiness the Gyalwang Karmapa was the Chief Guest at the “Global Conference for Peace” organized by the Mahabodhi Society of India. The Conference was held in New Delhi and commemorated the 2550th Buddha Jayanti.

On his arrival at Mavalankar Auditorium, the venue of the function, Dr.B.K..Modi, President Mahabodhi Society of India, along with Ven. Chosphel Zotpa, Honorable Member of the National Commission of Minorities, Government of India, senior functionaries of the Society and others in attendance, accorded the Karmapa a rousing reception. Several religious leaders from different faiths were seated on the dais. 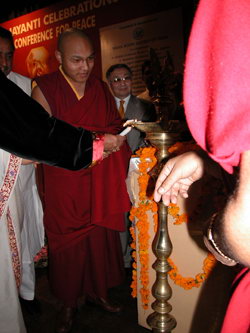 His Holiness Karmapa performs the traditional lamp lighting ceremony to open the Global Conference for Peace on April 7, 2006 in New Delhi

After chants by the monks His Holiness lit the traditional offering lamp and the organizers announced the publication of the book Whispers of Peace, compiled by Dr.B.K.Modi, containing teachings and texts from various religious traditions. Thereafter, His Holiness was invited to make the inaugural address. His Holiness in his remarks reminded the audience that Buddha’s message of peace and amity is beyond any religious or sectarian basis and is founded on a mission of generally benefitting the well-being of humanity as a whole. His Holiness noted that the world looks to India for wisdom and guidance. He expressed his appreciation and applauded the initiative of the Mahabodhi Society of India.

Among the dignitaries present were the Ambassadors of Sri Lanka and Mongolia. The local populace turned out in large numbers and were joined by a large delegation from Japan.

The second day of celebrations organized by the Mahabodhi Society of India to commemorate the 2550th Buddha Jayanti was held on the grounds of the Buddha Jayanti Park in New Delhi on April 9, 2006. In spite of the hot weather, devotees congregated in large numbers to hear Gyalwang Karmapa. Prof Samdhong Rinpoche, Prime Minister of the Tibetan Government- in-exile, and Union Minister Mr.Ram Vilas Paswan, were among the invited guests. The Japanese delegation comprising parliamentarians, the Mayor of Okinawa and eminent citizens as well as a large cultural troupe who were present in strength.

Welcoming the Karmapa, Dr.B.K.Modi, President of the Mahabodhi Society of India, lamented the fact that high spiritual Masters like the Dalai Lama and the Gyalwang Karmapa were still being treated as refugees, when, in essence, they are the lineage holders of the Buddha Dharma, which has its roots in India. Dr.Modi stated that such eminent leaders of the Buddhist faith should be conferred honorary Indian citizenship with all honour and privileges, in appreciation for their role in bringing the Buddha back to his country of birth. Echoing the sentiments expressed by Dr.Modi, Union Minister Mr.Ram Vilas Paswan promised to raise this issue before the Indian leadership. Mr.Paswan stated that he saw His Holiness the Dalai Lama and His Holiness the Karmapa as Indian Dharma Gurus and therefore, that they deserved honourable treatment as such.

In his own remarks, His Holiness exhorted the gathering to spread the message of the Buddha across the world to pre-empt strife. His Holiness stressed the value of spreading friendship and goodwill as a sustainable basis to bring peace in the world. His Holiness reminded the audience of the singular contribution of Dr. Bhimrao Ambedakar, architect of India’s Constitution, for giving impetus and ensuring that people of India remembered the greatness of the Buddha, as a social emancipator and kind teacher. His Holiness applauded the role of the Mahabodhi Society of India and, in particular, expressed appreciation for its President, Dr.B.K.Modi’s leadership. On behalf of the Mahabodhi Society and other co-organizers, His Holiness presented traditional Indian shawls to the delegates as a token of honour. His Holiness offered a khatak, the traditional Tibetan silk scarf, to Dr.Modi as a gesture of appreciation for his leadership. –Trinley Topgyal