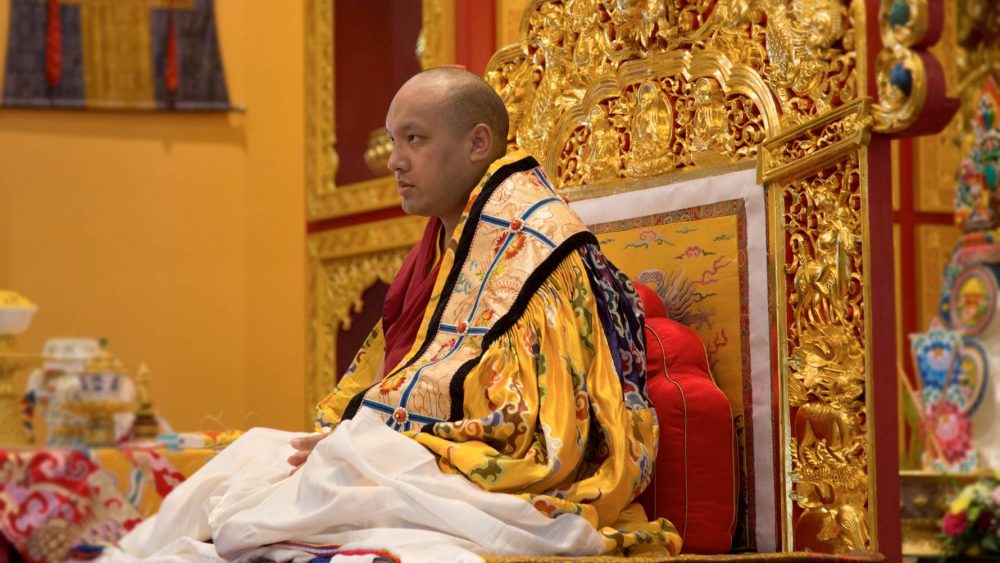 His Holiness arrives at Thrangu Monastery

On the 17th of June at 5pm, the Gyalwang Karmapa arrived in Vancouver-Richmond, British Columbia, at Thrangu Monastery. The sounds of the gyalings (trumpets) filled the air as His Holiness stepped onto the red carpet decorated with the auspicious symbols. With the Very Venerable Khenchen Thrangu Rinpoche and Dungse Lama Pema at his side, His Holiness made his way into the shrine room, walking slowly, making eye contact left and right with those that lined the walkway to welcome him.

Canadian monastics from Kagyu centers across the country, representatives from Tibetan Associations from British Columbia, Seattle and Portland, as well as main sponsors of the Thrangu monastery Eva Lau and Margaret Lee, along with local government officials and many devoted students were on hand on this auspicious occasion – His Holiness’ first visit to Canada.

“It has long been the wish of many Canadian students – who are long time students of His Holiness the 16th Gyalwang Karmapa as well as Thrangu Rinpoche and many Canadian practitioners of various Kagyu traditions – to see your Holiness, to be in your presence, “ said Jeff Chao, master of ceremony of the welcoming ceremony. “We are very fortunate to have this come true today.”

“We would like to extend the warmest welcome to His Holiness, not only to this monastery but to Vancouver and Canada for the very first time,” said Chao.

Lama Pema, who gave the keynote speech, spoke of how long the wish has been held for His Holiness to come to Canada. “This is an extraordinary event,” he said, “In particular I think it is through the power of Khenchen Thrangu Rinpoche and the Gyalwang Karmapa’s generating bodhicitta in the past that His Holiness has been able to set foot in Thrangu Monastery.”

“The various incarnations of the Karmapas have been the masters of the Thrangu Tulkus and have regarded them with great affection bestowing upon them all the pith instructions,” said Lama Pema.
“They have cared for Thrangu Tulkus for many lives.”

His Holiness performed a long life ceremony for Thrangu Rinpoche at the Kagyu Monlam in 2010 as well as in Varanasi in 2016. “Because of the frequent blessings for his long life, Thrangu Rinpoche has been able to live long, and this is the great kindness.”

“On behalf of all the lamas and the students of this monastery, I would like to thank from the bottom of my heart His Holiness for heeding our request and showing the great kindness of coming to this monastery. I pray that your His Holiness can return to this monastery and all the Karma Kagyu dharma centres in Canada many times and share the peaceful and cool nectar of the dharma ripening and liberating all sentient beings,” said Lama Pema.

His Holiness gave a brief speech in which he touched on the location the of the Thrangu monastery – on a street known locally as “the Highway to Heaven,” given its numerous temples and churches.

“The entire country of Canada, particular this area of Vancouver, is a place where there are various temples of different faiths as you can see when you drive up to this monastery,” said His Holiness. “What I think this shows is that all the different religious have a great respect and great regard and affection for each other. This is actually a special feature of Canada.”

He said he was pleased to come to a monastery built in Tibetan traditional style. “Places like this are hard to find in North America!” he said. “For all of us to gather in this place gives me a very special feeling.”

He ended by wishing Thrangu Rinpoche a long life and everyone else “a tashi delek.”

As Johal said in his speech: “Like any good strong friendship, one must visit many, many times to strengthen that friendship. Please do not be a stranger!”