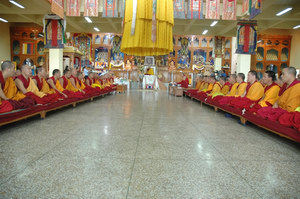 On June 26, 2007, His Holiness the Seventeenth Gyalwang Karmapa Ogyen Trinley Dorje’s 22nd birthday celebration program commenced at 8 am in the morning at Gyuto Ramoche Temple, the Karmapa’s temporary camp in Dhramsala. Unlike last year’s celebration of the Karmapa’s attaining the age of majority, this year’s celebration was a quieter affair, although attended by some 2000 dignitaries and disciples.

On behalf of the people of Tibet, Tsering Phuntsok, Minister of Cultural and Religious Affairs of the Central Government of Tibet in Exile, presented a long life offering. On behalf of the monastery residents of Gyuto, resident abbot Khen Rinpoche presented a mandala. On behalf of the Tsurphu Labrang, Drupon Rinpoche, His Holiness Gyalwang Karmapa’s General Secretary, offered a mandala. On behalf of Sherabling, Lama Tenam Shastri offered a mandala in concert with the head of Thrangu Tashi Choeling. Also, the head of the Tilokpur nunnery also offered mandala to His Holiness. These offerings were followed by offerings fromall the devotees who had specially travelled to Gyuto to greet His Holiness on his birthday.

His Holiness received the offerings and blessed everyone individually. To all in attendance, his Labrang offered a book containing speeches of His Holiness at Kagyu Monlam. The publication focuses on the disciplinary texts for Buddhist monastics, including a discussion of the advantages of the discipline of not consuming meat, based on teachings from many of the former Karmapas and lineage holders, including the 8th Karmapa Mikyo Dorje.

For the some 2000 attendees gathered for the celebration, the celebration concluded with a hearty meal and delicious cake served to all members of the assembly. – Tashi Paljor