Wishing for the Happiness of Others 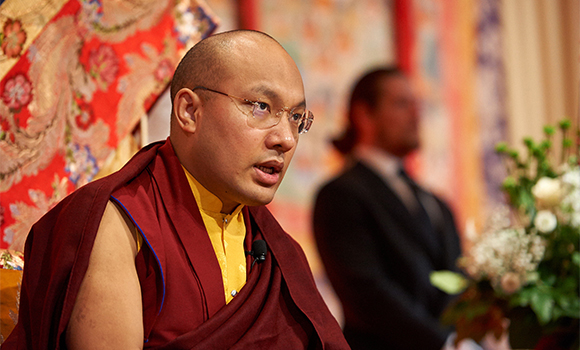 June 5, 2016 – Paris, France
Set in front of the throne this morning is a wide sofa chair covered with brocade. The Karmapa entered the hall from the left side and took his place on the chair, which gave a closer, more intimate connection to the audience that fills the hall wall to wall. The question and answer period went so long yesterday, he commented, there was no time for instruction on meditation, so he proposed beginning with meditation today.

On his last tour in the US, the Karmapa related that he had visited the Google and Facebook campuses, each of which have a room set aside for meditation, a sign that interest in meditation is increasing. He was concerned, however, that meditation might go the way of yoga, losing its traditional context and value, and turning into one more thing to market.

“Calm abiding and insight meditations are related as cause and effect,” the Karmapa stated. “Calm abiding must come first. If not, then insight meditation will be difficult, so I will introduce you to calm abiding first. It means bringing all of our mental energy to focus on one reference point, while simultaneously our mind becomes relaxed.”

The usual way of practicing calm abiding is to go to a solitary place devoid of distractions and noise—even a dog’s bark is said to be detrimental—and spend five to six months in meditation. In our contemporary world, he commented, it is difficult for this to happen, as distractions are everywhere so it is a challenge for us to practice calm abiding, for our mind should not be drawn outside by objects, but collected or turned inward. With the constant presence of smart phones and Internet access everywhere, this is difficult.

“What we call meditation,” the Karmapa explained, “actually means that whatever is happening, whatever situation we might meet, our minds remain settled within themselves; in a simple, unfabricated way they just rest there. If we can do this, then there is no need for us to do meditation as a separate activity.”

He then told a story about someone who came to meet the Third Karmapa, Rangjung Dorje and said he did not want to meditate. Is there a teaching for this? Rangjung Dorje replied, “Yes, but if I told it to you, you would check and try to meditate on it. And with that you would turn it into a fabricated practice, imposing something extra. So even if I gave you this teaching of no meditation, it would not benefit you.”

The Karmapa summarized: “When we practice calm abiding, we relax, do not let our minds wander outside, and rest in awareness no matter what is happening.” However, since we are so used to mental constructs and thinking about things, this kind of practice is difficult for us.

How do we practice meditation that needs no meditation? To illustrate the practice with the example of an affliction being liberated as it arises, the Karmapa selected one of the afflictions, anger. When it is on the verge of arising, just as it is emerging, we look into it, for once an affliction is fully present, it is difficult to work with. To do this practice, we need experience; without it, the thought of anger seems to be simultaneous with its arising fully in our mind. However, if we practice and come to know the situation, we can see that there is a sequence—first this happens and then that.

The Karmapa counseled, “When a thought arises, we look at it and simply rest with it. We are not looking for anything special. As soon as the thought arises, we rest our awareness there. This is all we need to do.” We do not analyze, thinking, “What is this concept? Where did it come from? Where did it go?” It is not that kind of meditation here. In sum, we merely need to open up our wisdom eye and look nakedly, just noticing (or paying bare attention to) how the thought is arising. “There is no need to analyze, make an effort, or think. We are simply looking,” he said.

“When we look like this,” the Karmapa noted, “the anger weakens. The usual, powerful dynamic of anger’s arising will lose some of its compulsive force.” He gave the example of a child who is telling a lie. If we look clearly into their eyes, they will naturally become embarrassed and back down. Similarly, since the afflictions are fictitious, having no real underpinning or basis, they will shrink just like the child telling a fib, when we look into them. With this vivid example, the Karmapa ended his discussion of meditation and turned to the topic for the morning, compassion and happiness.

The core of the issue, he explained, is that we want happiness in this world for ourselves because we take our self to be real in the sense of being autonomous and self-generating. We think we are independent, not needing to rely on anything or anyone else. Further, the Karmapa said, on the basis of taking a self to be real, we hold it dear and think it quite special. This unfortunate grasping to things as solid and real is extended from ourselves out to other objects, so we think, “My family, my friends, my things, my body, my house, ad infinitum.” Grasping onto the reality of a self seeps into everything.

The Karmapa added, “In general, however, we do need to care for ourselves; it is not a fault but actually a necessity. The danger is that we do this while taking the self to be real and independent. This way of thinking makes problems and could bring about our ruin.” He followed this with an example: taking the self to be real is like a prison with iron walls. “When we are incarcerated in the prison of the self,” he explained,” we cannot make connections with many other people, for only our parents and close friends are allowed in. The doors do not open to others.”

As a consequence of being stuck in the prison of the self, when our loved ones must go to the hospital, we are unable to help them. On a larger scale, he continued, while in this jail we are at a distance from all others, from all the living beings who have been our parents. Thinking about this can be quite dispiriting. So what we need to do, the Karmapa advised, is to take the hammer of a powerful compassion and break down the prison walls.

The Karmapa then turned to the subject of the Buddhist teaching on no self. “If we take the term literally,” he said,” we could think that it means there is no self at all. And people challenge this idea saying ‘If there is no self, then how can you talk about karma, cause and effect?’” But the Buddhism understanding of no self does not mean that the self is a blank or a void. Rather, the negation applies to the self that we think exists as independent and self-existent, as some kind of solid entity. This is the self that does not exist.

“The actual self is like a vast and endless web,” he elaborated, “that connects all possible phenomena. So we have to expand the way we think the self exists so that it can pervade the whole, immense universe and make untold numbers of connections.” “Self and other arise in dependence upon one another and,” he continued, “if we can make our relationships with others based on this understanding, then all living beings will be connected through a vast innernet” (playing off the word Internet). We can connect with everyone and everything through compassion, he said.

If we consider how things really are, then we will come to see that there is no difference between others and ourselves. We are a part of them and they are a part of us, and consequently, their happiness and suffering is ours and visa versa. It also follows that we must be concerned about and take responsibility for others. Most of the clothes we wear, for example, are not made here in Europe but elsewhere; however, we do not know names of the people who made them nor would we recognize them. Yet they have helped us by fashioning our clothes, and do so while receiving low wages and living close to poverty. Their difficulties have created something beneficial for us and so we must take responsibility for them.

Knowing that we depend on each other, we know that we must care for each other. If we do not care for others, then one day when we ourselves need assistance, it will be difficult to find. When we seek happiness, it should not be just for ourselves alone. The self that wishes only for its own happiness is mistaken; actually, from the point of view of how things truly are, that solitary self does not even exist. The central point here is that happiness in this world actually comes from wishing for others’ happiness. Therefore we should do all we can to develop our love and compassion. He concluded by saying that for him with all the difficulties he has known, what gives him real happiness is being able to help others.

A short session of question and answers followed.

How do we maintain awareness at the time of death? The Karmapa responded that we should train now. If we do not learn to focus our awareness now, it will be difficult to do when death comes. To school ourselves, we can think of one day as a whole life: in the morning we are born from the womb and we die when we go to sleep at night. If we learn to think like this, it will be helpful.

When your Holiness teaches in the West do you use the same terms or adapt the teachings for the audience? There is a slight difference, he said. When speaking to Tibetans, I do not need a translator, and when teaching others, he joked, I do not use a lot of quotes because they give translators a hard time. But actually there is not much difference.