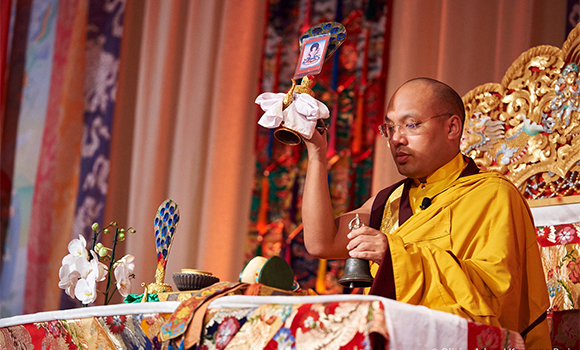 June 5, 2016 – Paris, France
On Sunday morning, the Karmapa spoke once more of the interconnectedness of all sentient beings and urged everyone to break out of their prison of ego-clinging through developing their compassion. His emphasis on compassion was evident once more in the afternoon, when he concluded his teachings in Paris with the empowerment of Four-Armed Avalokiteshvara, the meditation deity who embodies the compassion of all the buddhas.

At the end of the morning session, the Karmapa explained that this particular empowerment comes from the Nyingma tradition and is found in the Treasury of Precious Terma collected by the First Jamgon Kongtrul Lodrö Thaye. In the Nyingma tradition, there are three categories of teachings: ka-ma, ter-ma, and dak-nang. This empowerment is a dak-nang, originating from the pure vision of a lama, in this case the mahasiddha Tsultrim Zangpo. Because of shortage of time, His Holiness said, he would give the empowerment as a jenang, establishing an auspicious connection between the recipients and the deity, and giving the deity’s blessing.

Throughout the teachings in the conference hall, a thangka of Thousand-Armed Avalokiteshvara had hung to the right of the Karmapa’s throne behind a pagoda shrine housing a statue of Four-Armed Avalokiteshvara. For the final session, the shrine had been newly decorated with fresh offerings and was concealed by a patterned silk screen. His Holiness would perform the preparatory and concluding rituals behind this screen, while the audience chanted Avalokiteshvara’s six-syllable mantra, Om Mani Padme Hum.

The ceremony began with a recitation of the Short Vajradhara Lineage Prayer, followed by a brief chanting of “Karmapa Khyenno” (Karmapa think of me).

After the Gyalwang Karmapa had completed the first section of the ritual, establishing the environment in which the ritual would take place, he gave a brief explanation.

The audience would receive a jenang empowerment of body, speech and mind of the Four-Armed Lord of the World, Avalokiteshvara. During the empowerment, as these blessings of Avalokiteshvara would be conveyed primarily through recitation of the six-syllable mantra, it was very important for participants to focus their minds on the mantra, he explained.

His Holiness then led everyone through the three separate sections of the empowerment. As part of the mind empowerment, His Holiness instructed the participants to meditate in the way he had described during the morning session, naturally resting their awareness on whatever was arising. For two minutes the audience sat quietly in meditation, and then the Karmapa continued the ritual.

The organisers of the Paris visit and teachings, headed by Lama Gyurme, offered a body speech and mind mandala for the long life of His Holiness, and the ceremony concluded with dedication prayers for the well-being of all sentient beings.

In Buddhism, especially in the Mahayana, Chenrezig is the yidam deity or bodhisattva who symbolises compassion. For this reason, the practice of Chenrezig should not be confined to a shrine or meditation room. When you leave the meditation room, wherever you go, you should carry this practice with you at all times. Practicing compassion means that whenever you make a connection with another sentient being, you should never be separated from the thought of compassion or from compassionate action. That is the practice.

His Holiness brought his teachings to a joyful conclusion with a playful discussion of his hopes for the future. This is the third time that he has visited Europe, he said, and he hoped to be able to visit more countries in future. “This is just a beginning,” he promised.

He thanked everyone who had made the visit to France possible, especially Lama Gyurme, the organisers, and the people who had come to the teachings from near and far.

The Karmapa then performed the concluding rituals at the pagoda shrine, before returning to center stage. After everyone had sung the Dewachen Prayer, His Holiness took the microphone from Damien, the French translator. “I wanted to thank you all again,” he announced, “and I have the hope and prayer that I will see you all many times in the future.”

“Merci,” he said audibly, as he returned the microphone to Damien. The audience laughed in delight at his use of French. And so the 17th Gyalwang Karmapa concluded his first highly successful visit to France, and exited the conference hall, accompanied by long and laud applause.