Tibetan Unity and Language Are Crucial 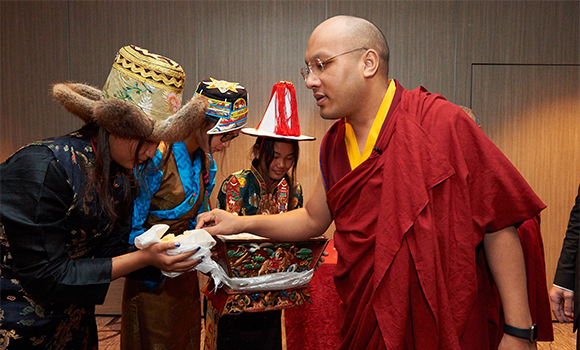 June 4, 2016 – Paris, France
This afternoon The Conference Center of the Marriott Hotel on the famous Left Bank of Paris was filled with thousands of Tibetans of all ages, from an old woman with sweet smile who wore an elegant chupa in brown brocade and her thinning grey hair tied back in a bun, down to the young generation of men wearing jeans under their chupa and their hair in the latest style, part cut very close and other long, looking in this context as if they were half lay and half monk. A group of ten in white shirts and black chupas joined eight young women, who were also dressed in back and white with their hair in long plaits down their backs, as they all welcomed the Karmapa with a Tibetan song.

The leader of the association of Tibetans offered an official welcome to His Holiness, explaining that they sought to improve the position of Tibetans in France and had established a school for Tibetan language while also studying Tibetan culture. He requested the Karmapa to give the transmission of Avalokiteshvara’s six-syllable mantra and the mantra of Guru Rinpoche, and in closing, supplicated him to sustain a nonsectarian approach and live a very long life.

In a resonant voice the Karmapa first gave the reading transmission for a brief practice of Avalokiteshvara and repeated the mantra with the audience, which was followed by a transmission of the Guru Rinpoche mantra. As he has in other talks to Tibetans, the Karmapa emphasized the critical importance of all the Tibetans in the three traditional areas of Tibet coming to think of themselves as one people and developing harmonious relationships with each other. “They should consciously sustain the feeling of being close brothers and sisters,” he counseled, and take the Tibetans in Tibet as their models for courage and dedication.

The Karmapa also spoke in general of the difficult situation of refugees in Europe, and in particular the Tibetans who were a small part of this group. He advised them to meet directly the problems they face while keeping their spirits up and not losing their determination. He sympathized with them, saying that he, too, has faced great difficulties since leaving Tibet but, he said, these problems could be reframed as opportunities to learn. “Most successful people,” the Karmapa remarked, “had to deal with troubles at first, which they faced without losing heart, and this led to a favorable outcome. So Tibetans should not give up. They have the support and concern of HH the Dalai Lama and the Central Tibetan Administration as well as the good will of many people around the world.”

Returning to a major theme of his talks to Tibetans, the Karmapa underlined once more the importance of sustaining written and spoken Tibetan, which is the very root of the Dharma in Tibet and its culture. He empathized with them saying that when living in a country where the culture, view, and language are different, it is difficult to sustain one’s own traditions. Nevertheless, it is essential that they make an effort to train themselves, especially in the Tibetan language. The Karmapa remarked that based on his experience of studying languages, what we need in the beginning is a feeling for the language, an interest based on a great fondness for it and what it represents.

The Karmapa concluded his talk with a plea for religious tolerance. All the Buddhist traditions in Tibet come from one source, the Buddha, so the differences between them are not great. There is one current of the teachings, within which a few variations may surface, such as the way the bell and dorje are handled; however, it is a huge mistake to inflate these small distinctions into a basis for attachment and hatred, asserting one’s own tradition to be better than another’s.

To illustrate his point, the Karmapa related a cautionary tale. It is said that toward the end of his life, the Buddha had a conversation with Mara who, of course, did not want to see the Buddha’s teachings spread, as he would be out of work. The Buddha said that even though he would not be present, his teachings would persist. And Mara replied that he would make obstacles to destroy them. How? Mara would send his emanation in the guise of a holder of the Dharma to incite discord among Buddhist teachers.

So the reason for the decline of the Buddha’s Dharma would not come from outside, but from within, from disputes between the holders of his teachings. The Karmapa reiterated that the differences between lineages are minor in terms of view, meditation, and action, and urged everyone to keep this in mind. He concluded with thanks to everyone for taking the time and making the effort to come.