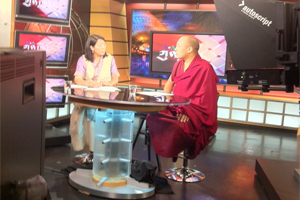 His Holiness the Karmapa gave two interviews this morning at Radio Free Asia and Voice of America. He spoke very eloquently about the issues dearest to his heart at Radio Free Asia, including the need for environmental protection of the Tibetan Plateau. He said that the Tibet issue is not simply a political one but something that transcends politics since it is the third pole and the source for freshwater for the rest of mainland Asia. Whatever happens in Tibet therefore will greatly affect India and the other downstream countries. Picking up this same theme, he reminded Tibetans in Tibet to follow what His Holiness the Dalai Lama had said regarding the use of wildlife products and the need to conserve nature and develop compassion for all living beings including endangered species.

Following the second half of Kalachakra empowerment given by His Holiness the Dalai Lama, His Holiness the Karmapa attended an in house reception in his honor at the International Campaign for Tibet office, where he spent time with Loday Gyari Rinpoche and Richard Gere.