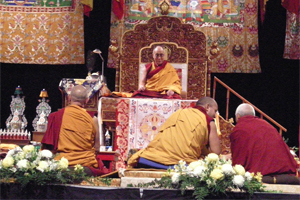 On the last day of the Kalchakra event in Washington DC, His Holiness the Karmapa attended the morning session which began at 7 am with prayers led by His Holiness the Dalai Lama, who then proceeded to give the White Tara long life empowerment to all those gathered in the hall. Following this, a long life prayer was held for His Holiness the Dalai Lama by the organizers of the teachings and recited by Katri Samdhong Rinpoche. In turn, the North America Tibetan Association presented a special award to Katri Samdhong Rinpoche before the Kalachakra event drew to a close.

During his last afternoon in Washington DC, His Holiness gave private audiences with several groups including Daniel and Tara Goleman, well known best-selling authors of several books on science and behavior. Daniel Goleman is also a board member for the Mind and Life Institute, established by His Holiness the Dalai Lama to foster dialogue between scientists and Buddhists.

On the eve of his departure to New York, His Holiness visited some memorials in Washington DC and also gave a large public audience mainly to the Tibetan community gathered in Washington DC from all over the world.