The Official Statement on the Recognition of Bokar Rinpoche’s Reincarnation 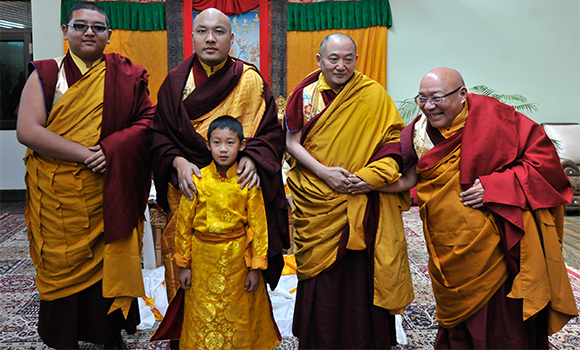 When the supreme guide and master Kyabje Bokar Rinpoche passed to nirvana, enthroning his supreme nirmanakaya reincarnation became a responsibility that none of the branches of Bokar monastery could shirk. After his passing away in 2004, the traditional forty-nine days of puja were held. At the request of Mirik Monastery, His Holiness the Gyalwang Karmapa Ogyen Trinley Dorje came to Mirik and presided over the last day of the puja. The following day Khenpo Rinpoche Lodrö Donyö along with the monastery’s khenpos, lamas, chant masters, officials including the general secretary and managers, and teachers as well as the monastic and lay communities associated with the monastery offered the Gyalwang Karmapa a mandala and representations of body, speech, and mind. They then fervently requested the Gyalwang Karmapa to identify Bokar Rinpoche’s reincarnation through his wisdom. The Gyalwang Karmapa graciously consented, and they were filled with limitless joy.

During the decade that has since passed, they have made their request again every year. The lamas and students from Dharma centers in Asia and the West, and Rinpoche’s devoted students from India, Nepal, and Bhutan repeatedly reminded His Holiness in a variety of ways, but aside from receiving his consent, the requests bore no fruit.

At a meeting of the Kagyu Monlam working team after the conclusion the Thirty-First Kagyu Monlam in January, 2014, the Gyalwang Karmapa said for the first time that he hoped everyone would be able to meet the reincarnation of Bokar Rinpoche during the Thirty-Second Kagyu Monlam. Everyone was filled with great hope. On the thirtieth of January, during a celebration of the Tsurphu New Year, the Karmapa gave a letter identifying the reincarnation, which reads:

In the north of the hidden land of Sikkim, in front of a mountain shaped like a lhashö torma there is the six-year-old son of a father whose name has a ta and a mother whose name has an a. If he is recognized as the reincarnation of Kyabje Bokar Rinpoche, it will be beneficial for the teachings and beings.

Several senior monastery officials were immediately appointed as a search committee, and based on the letter, they identified three lists of children, the names of whose parents, the topography of whose birthplace, and whose ages mostly matched the identification letter. But when presented to His Holiness, he gave no specific instructions on what to do or who it was.

During the Thirty-Second Kagyu Monlam held in Bodhgaya in December 2014, there was a great expectation of seeing the reincarnation’s face, but it did not come to pass.

On the sixth of January, after the Thirty-Second Monlam was completed, the Gyalwang Karmapa specially invited Khenpo Rinpoche Lodrö Donyö to a dinner gathering for the Monlam working team, which was also attended by the two heart sons. After the meal, the Karmapa said with great delight, “Though I had hoped that Kyabje Bokar Rinpoche’s reincarnation would be able to come to this year’s Monlam, the timing did not work out. But we should be able to bring him to the upcoming Arya Kshema Winter Dharma Gathering, and Khenpo Rinpoche should go bring the reincarnation to Bodhgaya.”

On the eighth, Khenpo Rinpoche departed for Gangtok, accompanied by a party including Khenpo Gawang as a representative of the Tsurphu Ladrang. They arrived there on the ninth. In addition to the identification letter from last year, they based their search on the Gyalwang Karmapa’s advice to search in the village of Dimkhyim in the North Sikkim district. The Gyalwang Karmapa had also recently provided new, more detailed maps and diagrams of the reincarnation’s birthplace and information about the number of members in his family. Khenpo Gawang and the general secretary searched in Dimkhyim and found one boy who matched all of the criteria. They relayed the information to His Holiness, who told them to wait while continuing the search.

On the twelfth, His Holiness said that the boy who had been identified a few days earlier should be brought to Khenpo Rinpoche, so the boy was brought to the Norkhill Hotel in Gangtok where he was staying. With boundless delight, Khenpo Rinoche blessed the reincarnation by touching his head and hands with the previous Bokar Rinpoche’s Shakyamuni statue that had been his support for his vows and the blessed image of Tara that had been his support for meditation. He also performed a cleansing ritual. His Holiness told them that same evening to come to Bodhgaya quickly, so they departed the next day for Bodhgaya, arriving on the morning of the fifteenth.

As related above, throughout the process the Gyalwang Karmapa used his wisdom and great compassion to identify the reincarnation of Bokar Rinpoche without mistake, fulfilling the wishes that everyone from Bokar monastery and its associated branches as well as all of the faithful disciples from dharma centers around the world have held in their hearts for many years. It is due solely to the compassion and bodhichitta of His Holiness that the reincarnation has been recognized—were one to fill the entire universe with jewels and offer it to him, it would not repay even a fraction of his kindness. All the disciples of Bokar Rinpoche, monastic and lay, bow with body, speech, and mind and join their palms at the crowns of their heads to express with a single voice their thanks for his unsurpassable kindness.