Nuns Train to be Health Workers 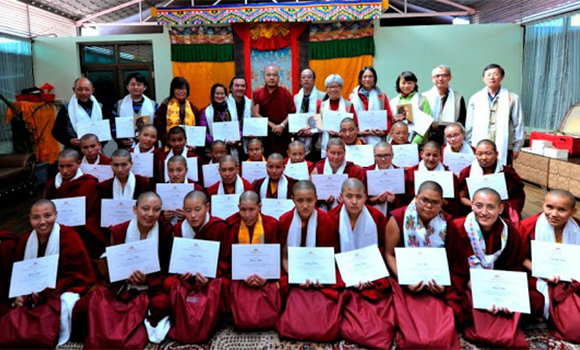 19 January, 2014
During the Second Arya Kshema Winter Gathering, instead of attending the teachings and debates, a group of 28 nuns have been following a special programme. Drawn from seven nunneries–Ralang and Tilokpur in India, Karma Leksheyling, Tara Abbey, Osel Karma Thekchöling and Samten Ling in Nepal and Drubde Palmo Chökyi Dingkhang in Bhutan– the nuns spent eight days studying basic heaIthcare and how to respond to medical emergencies.

The programme was born out of a meeting between the Gyalwang Karmapa and Dr. Jeffrey Chen, CEO of the Taiwanese NGO Taiwan Health Corps. The Gyalwang Karmapa had been considering initiatives for improving both the health and healthcare of nuns and Dr. Chen was interested in developing a programme of rural health worker training in monasteries and nunneries.

The team of ten health professionals from Taiwan Health Corps, who came especially to Bodhgaya to give the training, included a surgeon, a gynaecologist, a family physician, a dentist, a doctor trained in traditional Chinese medicine and two senior nurses. Dr. Dawa from the Kagyu Monlam health team acted as adviser and translator.

To correct any misunderstandings the nuns might have, the course opened with a session on anatomy. This was followed by an overview of minor ailments such as constipation, colds and flu, fevers, stomach upsets, headaches, parasites, and anaemia, and suggestions about primary interventions which might be sufficient, such as commonly available medicines and supplements. The nuns found this session particularly valuable.

“Now we know what to do,” explained one nun. “If someone has a minor illness, there is no need to send them to the doctor immediately. For example, if they have diarrhoea, we can use rehydration and monitor what happens.” A session on pharmacology ensured that they knew how to administer medicines, their side effects, allergic reactions and dangers.

The bulk of the course, however, comprised very practical “hands on” sessions, where the nuns learned basic first aid and what to do in medical emergencies: resuscitation, how to stop or reduce bleeding, using splints to immobilise broken bones, bandaging wounds, checking head injuries and assessing burns.

They practised CPR on specially designed dummies– a green light it up when they managed to do chest compressions correctly–and were surprised at the degree of force necessary. “You do have to break ribs sometimes,” a doctor warned them. When it came to splinting a broken leg, they devised a way to preserve a monk or nun’s modesty by immobilising both legs with a splint tied on the outside of the robes. While learning to do the Heimlich Manoeuvre [used when people choke], they burst into laughter every time someone succeeded in popping the cork forcefully from the mock chest bag they were using to practise the technique.

“We can help many people by learning this,” commented a young nun from Nepal, “Not just in the nunnery, but outside in the community too.”

Another session that the nuns found particularly helpful was on women’s health. In order for the nuns to feel comfortable and able to talk openly, only the gynaecologist attended, and one of the nuns translated from English to Tibetan. After a general introduction, the nuns were free to ask whatever they wanted, and they did, raising a wide range of issues from their own personal experience and that of family and friends. Everyone agreed that this was a major source of health problems and worry in their nunneries, and that their new knowledge would be of immediate benefit when helping and advising other nuns.

A brief description of traditional Chinese medicine was included in the course too.

On the penultimate day there were further practical sessions, revising all the techniques which the nuns had been taught and an informal assessment of their skills. Both students and teachers felt that everyone had learnt a lot and had a lot of fun in the process; all the nuns were keen to learn more about health care and requested further training. Finally, on the last morning, the nuns, with their trainers, had a surprise audience with the Gyalwang Karmapa, who presented every nun with a certificate of course completion.

NGO Taiwan Health Corps, whose motto is We do it for love, have worked previously with the Root Institute in Bodhgaya, a Buddhist monastery in Bangladesh, and have run projects in Nepal, Turkestan and West Africa. This was their first time working with nuns and everyone was impressed by how much enthusiasm and effort the nuns put into the course. They hope to continue the programme over three years, across nunneries and monasteries in the Himalayan region specifically, with the aim of supporting essential healthcare in remote areas and small communities.