An Evening of Prayers for the Deceased

At the end of the teachings this morning, the Gyalwang Karmapa announced that in the evening, there would be a special ceremony for the deceased. After he left the shrine hall, the ordained sangha wrapped themselves up in their warm, woolen zens and the lay people pulled on their puffy jackets and slung their scarves around their head and shoulders to brace against the cold outside. Many of the exiting crowd headed quickly for the Tsurphu Administration’s office near the side gate into Tergar. Here, on the shiny black desks, they would find rose pink sheets of lined paper with “Deceased” printed at the top. On these, they wrote the names of loved ones, relatives and friends, who had passed away. During the evening’s puja, these sheets would be offered to a ritual fire that, after prayers, mantras, and supplications, cleansed away negativities and obstacles for those whose names went up in flames. 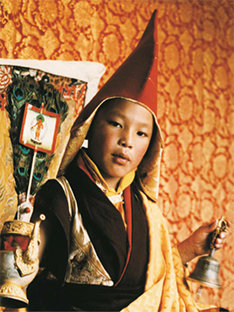 The puja being performed was an essential version of “Overturning the Depths of Samsara” (‘Khor ba dong sprugs), which is a special form of a standing red Avalokiteshvara with one hand holding a flower garland and the other, a vase. Coincidently, this deity was the very first empowerment that the Karmapa ever gave. It was on September 29, 1992 when he was eight years old and living at Tsurphu Monastery in Tibet. Two days before, over twenty thousand people had come from everywhere in the Land of Snow and the world for his enthronement and this empowerment was his gift to them.

For this evening’s puja, Osel Nyingpo, the Karmapa’s personal shrine attendant, had placed a table before the Karmapa’s throne and set upon it seven large offering bowls, a beautiful butter lamp, and an elevated platform holding a mandala plate on which is placed a ceremonial vase tied in red silk with an image of the deity nestled against a small fan of layered peacock feathers. Special for this ceremony is the eighteen inch metal stand on the right of the platform. From its crossbar, covered in a deep yellow kata, hangs a piece of paper (or name card), representing the deceased and covered in line drawings of the objects of the five senses, and so forth. Stacked next to it are all the rose pink sheets from the Tsurphu Office, now filled with names listed by the monks, nuns, and lay people attending the puja this evening. All of these will also be included in the prayers.

The Karmapa enters the shrine hall surrounded by the sound of jalings. Once he is settled on his throne, the ceremony begins with prayers to Guru Rinpoche followed by the practice of Overturning the Depths of Samsara. During this ritual, the Karmapa calls in the consciousness of the deceased to abide in the symbolic paper on the stand and then blesses it with saffron water from the conch, flicked by a long stalk of supple kusha grass. With a precise and swift gesture, the Karmapa throws mustard seeds to clear away obstacles, and purifies the consciousness, signified by pouring water from the vase over a small round mirror of metal. Osel Nyingpo then takes the stand, walks down the main aisle, carpeted in a rich red rug, and turns to bow several times to the Karmapa with statues of the Sixteenth Karmapa and the Buddha directly behind him.

Osel Nyingpo then returns the vase to the Karmapa, who takes it to bless in four places the paper symbolizing the deceased’s consciousness. Offerings are made of the five sense objects—food, incense, cloth, and so forth—and a teaching is given on not being attached to samsara and to travel to Dewachen as a body of light. The deceased’s consciousness is imaged in the form of a white Ah and transferred into the heart of Amitabha. After the lineage prayer that is usually recited after the Four Session Guru Yoga, Osel Nyingpo brings in a large metal basin, over which he holds the metal stand. Having taken the flame from a gently burning lamp on his table, the Karmapa lights the bottom of the paper with a long stick wrapped in cotton, thus starting the process of consuming by fire all the obscurations of the deceased: “With the flames of wisdom, all impurities are cleansed away in the expanse of primordial purity, clear and deep.”

In no time, the papers curl up in flames, their light reflected on the Karmapa’s radiant face while his lips move in prayer and his left hand rings a resonant bell. He continues his prayers while adding the rose colored papers to the flames, momentarily rising up higher than his head. For a long time, the papers burn while the drum and cymbals roll. At the end, the Karmapa circles the vase above the basin, pouring a clear stream of water to bless and extinguish the last flames. The evening comes to a close with additional texts, including a heart-felt chanting of the Prayer To Be Reborn in Dewachen:

May we take birth in Dewachen.
Once we’re born there, may the lotus open;
In that body, may we be enlightened.
Thus fully awakened, may our emanations
Guide living beings ’til the end of time.