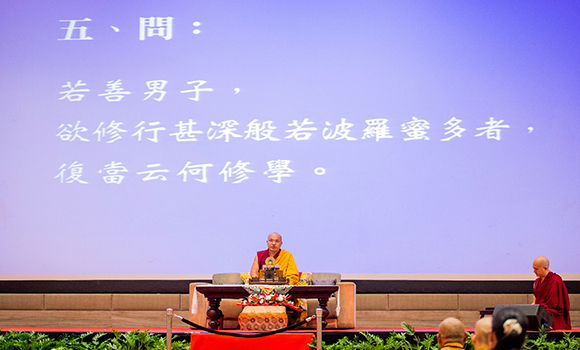 16 August, 2016 – Hyatt Regency Gurgaon,
The session began with an invocation to Incense Cloud Buddha, whose golden image beamed down from the screen above the stage. This is the traditional Chinese way to begin all teachings, because when Incense Cloud Buddha lights his incense all the buddhas are summoned to listen to the teaching. Another feature of these study sessions is the recitation of the Heart Sutra in Chinese, sung to a particular musical style known as the Ocean’s Wave: a rolling, rhythmic chant, with descant and alto harmonies, peaceful and soft like the motion of gentle waves on the surface of the ocean.

Previously, in the opening session, the Karmapa had delineated the eight sections of the sutra and commented on the first three: the prologue, the time and the retinue. He now moved on to explore the section on the necessary causes and conditions.

To begin with, however, he gave more details of the story concerning the origin of the name Rajagriha, which some interpret as meaning ‘Rajah’s Sacrifice’. The name of the rajah or king who insisted on animal sacrifice was Vasu. Vasu was a lay Brahmin, but growing tired of the world, he took ordination.

One day, however, a dispute arose between ordained Brahmins and lay Brahmins. The lay Brahmins maintained that sacrificing animals and eating the meat were an essential part of the ritual as set down in the scriptures. The ordained Brahmins contested this strongly. Finally, the latter suggested they consult the ordained Rajah to adjudicate in the matter. But that night the lay Brahmins secretly went to see Vasu, and asked for his support. So, the following day, when the ordained Brahmins asked Vasu whether it was right to kill animals during sacrificial ceremonies, he replied that ritual sacrifice was in accord with the Vedic scriptures and therefore they should. The ordained Brahmins were shocked and asked for Vasu’s own personal view. Vasu replied, “In my opinion, a sacrificial ceremony for the gods must include the sacrifice of animals, but after their deaths they will be reborn in the heaven realm. “

The ordained Brahmins were very angry. They scolded him, called him a liar and even spat at him. Then they cursed him, and immediately Vasu sank into the ground up to his ankles. The Brahmins gave him a second chance. Again they questioned him, but again he said that of course animals should be sacrificed, and he sank up to his knees in the ground. This question and answer continued, until, finally, only Vasu’s head was visible above ground.

The Brahmins gave him one last chance. They urged him to admit that he was wrong, tell the truth, and they would still be able to save him, but Vasu reflected on the humiliation that would entail, and also on the Vedic texts which praised the sacrifice of animals to the gods. So, with his last breath, he maintained once more that sacrificing animals is not a crime. The ordained Brahmins said that they never wanted to see him again, and he disappeared below the ground.

As a consequence, his son moved the capital of the kingdom. It also became the custom before slaughtering sacrificial animals to tell them to lay the blame on Vasu, and this practice still continued at the time of Nagarjuna [c.150-250 CE].

Section 4: The Causes and Conditions which led to the teaching of the Heart Sutra
At that time the Bhagavan entered the samadhi called Profound Light. At that same time, the noble Avalokiteshvara, the bodhisattva mahasattva, looking into the practice of the profound perfection of wisdom, saw that the five aggregates by their nature were empty.

His Holiness commented that at the beginning of all sutras there is a common epigraph. This section, however, is the specific prologue explaining the causes and conditions which led to this particular sutra. “At that time” refers to the point in time where the Buddha entered samadhi before he began his teaching. Because the Buddha was able to recognise that the positive karma of all those present had ripened, he knew it was the right time to teach the Dharma, and for that reason “he entered the samadhi called Profound Light.”

The word profound, His Holiness explained, refers to the ultimate emptiness. Vimalamitra asserted that emptiness is referred to as profound because it transcends all extremes of experience. Similarly, in the Perfection of Wisdom in 8000 Lines [Aṣṭasāhasrikā Prajñāpāramitā Sūtra] it is stated that “Profound Light” means emptiness. It adds: “Prajñāpāramitā is profound; hard to see and hard to explain.” From this one can see that it is profound because it has transcended concepts and language.

Vasabandhu in his Daśabhūmika-sūtra uses the terms profound silence, profound nirvana, profound emptiness, and so forth. In total, he gives nine explanations for the use of the word profound.

Buddha usually rests in samadhi, the Karmapa continued, and would remain in that state, so there was no need for him to enter into samadhi. The Buddha appears to enter into samadhi from the point of view of other beings. He manifests as entering into samadhi in order to enable the retinue, whose main teacher was Avalokiteshvara, to understand profound emptiness and to understand his thoughts, his intentions and his world. Normally, except for Buddhas, other sentient beings would be unable to understand the Buddha’s thoughts, even the bodhisattvas, but the Buddha has a special power of blessing so that people can share his thoughts. The Mūlasarvāstivāda Vinaya Vastu states that even ants and insects were able to share the Buddha’s thoughts by this power.

“Samadhi” means a state of focused concentration: letting the mind rest in silence through the power of concentration and mindfulness so the meditator is undistracted by the external environment. The mind is clear, stable and able to rest evenly on an object.

In the Saṃdhinirmocana Sūtra, it is mentioned that samadhi is the source of all merit in both Mahayana and Theravada traditions. Vasubhandu in his Abhidharmakośa stated that keeping vows leads to rebirth in the heavenly realms but meditation will lead to liberation.

“Without samadhi,” the Karmapa commented, “you cannot even escape this desire realm, much less attain liberation.”

His Holiness then explored the many different meanings of the Sanskrit term dharma.
First of all, it has the meaning of maintaining, and can refer to the maintenance of all phenomena, as they have a self-sustaining nature. Here it refers to the Buddha’s true dharma, a special ability to maintain or sustain itself.

There are many different types of dharma, for example the Two Truths, the Four Noble Truths, the Threefold Training, and so on. But the dharma referred to here is the true dharma of samadhi, and a particular type of samadhi, the practice of profound transcendent wisdom.

Avalokiteshvara is described as “a bodhisattva mahasattva” which means that he is a great bodhisattva who has attained level eight or above in the bodhisattva levels.

…the noble Avalokiteshvara, the bodhisattva mahasattva, looking into the practice of the profound perfection of wisdom, saw that the five aggregates by their nature were empty.

Then through the power of the Buddha, the venerable Shariputra spoke these words to the noble Avalokiteshvara, the bodhisattva mahasattva. “Son of a noble family, how should any son or daughter of a noble family train when they wish to practise the profound perfection of wisdom?”

Both the Buddha and Avalokiteshvara have entered samadhi and now will discuss emptiness, His Holiness observed. “Venerable” is a term of address which shows respect, he explained, and the name “Shariputra” means “the child of Shari.” Shari was his mother’s name, and means “the bird of 100 tongues.” Two explanations have been given for her name. One suggests that she had beautiful eyes like the bird. The other says that when she became pregnant with Shariputra she became very intelligent especially in debate, and so she was called Shari. Vimalamitra’s commentary on the Heart Sutra explains that Shariputra is addressed as venerable in recognition that he has cut through all obscurations.

Of Lord Buddha’s two main disciples, Shariputra and Maudgalyayana, Shariputra excelled in wisdom, thus he was the natural candidate to ask the question on emptiness, but he asked the question “through the power of the Buddha.” Here, the Buddha’s power, out of the three powers of body, speech and mind, refers to the Buddha’s mind.

Then, having received the Buddha’s blessing, Avalokiteshvara, answered Shariputra’s question. This is a very important point because it shows that the Buddha’s sutras may not necessarily come from the Buddha himself, but they can still be the authentic words of the Buddha. The Karmapa now explored the claim from many Theravadan scholars that the Mahayana teachings are not the authentic words of the Buddha, but were composed by Nagarjuna. His Holiness suggested that this view can be challenged from both historical evidence and from the sutras in the Theravadan canon. In early Theravada Buddhism there were two main schools, the Sarvāstivāda and the Mahasanghika.

Further evidence for the authenticity of Mahayana texts comes from references in Theravadan texts to terms linked with the Mahayana, for example the ten bhumis and the ten paramitas, which means that there must have been a source they were working from.

From the historical evidence, research by modern scholars dates the birth of the great master Nagarjuna to circa 150 C.E. and the earliest known translation of a Mahayana sutra, the Exalted Sutra on the Perfection of Wisdom, from Sanskrit into Chinese is dated 179 C.E. From these dates it is obvious that this sutra must have been in circulation in India before the birth of Nagarjuna. So it is possible to assert that Mahayana philosophy and texts were not created by Nagarjuna. This raises the further question of why Theravadan scholars would doubt their authenticity as the words of the Buddha.
His Holiness suggested two key reasons:

• Mahayana teachings are very profound and difficult to understand, and have to be collected buy the great Bodhisattvas;
• The content of Mahayana sutras is very vast, while the lifespan of beings in the human realm is limited and their memories are poor, so many of the sutras were assigned to the protection of the yakshas and heavenly beings and kept in the heavenly realms. The Theravadins were unaware of their existence.

With this, the morning study session came to an end. “Now let’s talk about attaining Buddhahood,” the Karmapa remarked, as he began to put away his notes, and set the scene for the afternoon session.