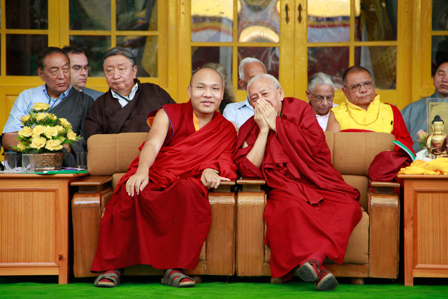 In a short speech, which both surprised and delighted the huge crowd gathered in the courtyard of the main temple, Gyalwang Karmapa balanced wit and humour with a respectful seriousness when considering Samdhong Rinpoche’s great achievements during his tenure as Kalon Tripa.  At one point, even the usually austere face of Samdhong Rinpoche broke into a wide smile, when His Holiness referred to him as “the Dharma police” and expressed concern that Samdhong Rinpoche might scold him if he were to misbehave in any way.

The function, organised by the Tibetan Association of Belgium, was held to bestow an honorary award on Samdhong Rinpoche, the out-going Kalon Tripa [Prime Minister], for his outstanding leadership of the Tibetan government-in-exile. The Gyalwang Karmapa attended as chief guest and presented the award − a statue of Buddha, an honorary citation and a set of monk’s robes − on behalf of everyone.

Speaker of the Tibetan government-in exile’s elected assembly, Penpa Tsering, acted as master of ceremonies. Other guests included Kalon Tripa-elect Dr. Lobsang Senge, former and senior functionaries of the Tibetan administration, Special Envoy Gyari Lodoe Gyaltsen, Indian dignitaries and participants of the Tibetan National General Meeting, which is currently meeting to discuss the transfer of powers and responsibilities following the retirement of His Holiness the Dalai Lama.