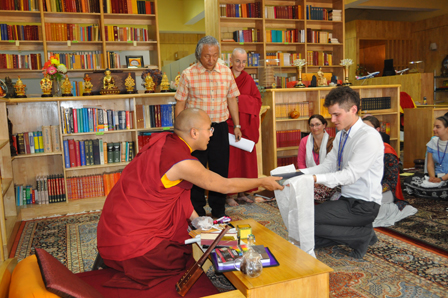 His Holiness the Gyalwang Karmapa yesterday concluded a three-week series of teachings to a group of students from the University of Redlands in California, USA.  The 16 students had travelled to India to study with His Holiness as part of a unique college course called: Sustainable Compassion: Conversations with His Holiness the 17th Karmapa. The aim of the course was to allow the American students, nearly all non-Buddhists, to hear from His Holiness “what Buddhism can offer the global community,” according to the teacher leading the group, Professor Karen Derris, PhD (Harvard University).

Over the course of several months prior to their arrival in India for the classes with His Holiness, the students worked with their professor and a group facilitator to develop a list of ten topics that reflected their concerns for the world and for their own lives. Though coming from a wide variety of academic disciplines, the 16 students all study in the university’s Johnston Program and all share a general hope to dedicate their careers to working to relieve suffering in the world. The topics they selected to discuss with His Holiness were:

From May 3 through May 22, His Holiness met with the students in his personal library at Gyuto Monastery in Dharamsala. Each session was devoted to a single topic. The sessions began with presentations by the students articulating their personal concerns on each issue, followed by a teaching by His Holiness and an extended question-and-answer section. His Holiness taught partly in English and partly in Tibetan, with translation into English provided by Ngodup Tsering Burkhar, his longtime translator.

During their first meeting, His Holiness noted that since he and the students were born around the same year, they had been sharing this planet all along, but had only now had the opportunity to meet one another. A majority of the students are graduating seniors, and as they looked ahead, the Gyalwang Karmapa encouraged them not to think of the lives they would live as simply what they did and experienced based on their own limited body, but rather to envision that their lives could extend far beyond themselves and touch many others in limitless ways.

In the 12 meetings that followed, His Holiness offered the young students guidelines for doing just that, and for dealing with the obstacles they were likely to face as they sought to forge lives that were meaningful for themselves and beneficial to others. Throughout the course, the Gyalwang Karmapa presented Buddhist teachings with virtually no Buddhist terminology, and offered tools that did not assume or require that the students would accept Buddhist theories or adopt Buddhist practices. As a result, the students left with universal wisdom already suited for them to apply to their lives as non-Buddhists.

On their final day in Dharamsala, the students held a concluding dinner with His Holiness, where they expressed their gratitude and offered the Gyalwang Karmapa several songs, including an original song they composed based on one of His Holiness’ teachings and a jazz rendition of His Holiness’ Ah, World tune. One student and a group facilitator also read a prayer they had composed together in His Holiness’ honor. The group further presented His Holiness with a bag featuring a logo they had designed to commemorate their time with him.

As the course drew to a close, several students expressed how moving it was for them to encounter a spiritual leader who appeared to be their peer in age but who was so clearly beyond them in wisdom. Deeply inspired by their interactions with His Holiness, the students described the three weeks with him as “utterly life changing.” The group has created a blog called karmapaconversations.blogspot.com where they will share their experiences and impressions of what they learned.

This series of meetings between His Holiness and the University of Redlands students will be published as a book aimed at young adults in the West.