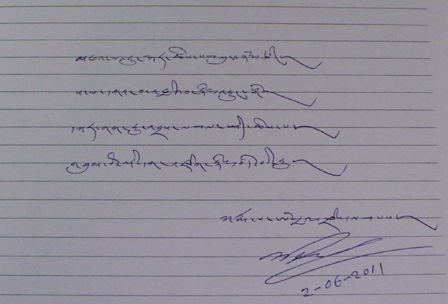 (His Holiness composed a short poem for the 50th anniversary)

In addressing those gathered to mark the 50th anniversary of the establishment of the Tibetan Institute of Medicine and Astrology in Dharamsala, the Gyalwang Karmapa said that Tibetan astrology must go hand in hand with medicine, as the two are inseparable. The number of astrologers is far smaller as compared to doctors, and His Holiness said he felt that astronomy and astrology are also significant areas of scientific learning that are interrelated with medicine and Buddhism.

Lauding the premiere Tibetan medical institute in exile for its achievements thus far, His Holiness said it should nevertheless continue to exert effort to secure greater goals in the traditional field of ancient Tibetan healing. “The complacent attitude over our achievements is the main obstacle to future progress. From the Buddhist point of view, the thought of having achieved so much and being contented with our achievements prevents our further progress,” said the Gyalwang Karmapa.

The ceremony commenced with a long-life offering of the three jewels to His Holiness the 17th Gyalwang Karmapa by the Director, Dr. Tsewang Tamdin.  The Principal of the College offered a welcome address, and presented a progress report.